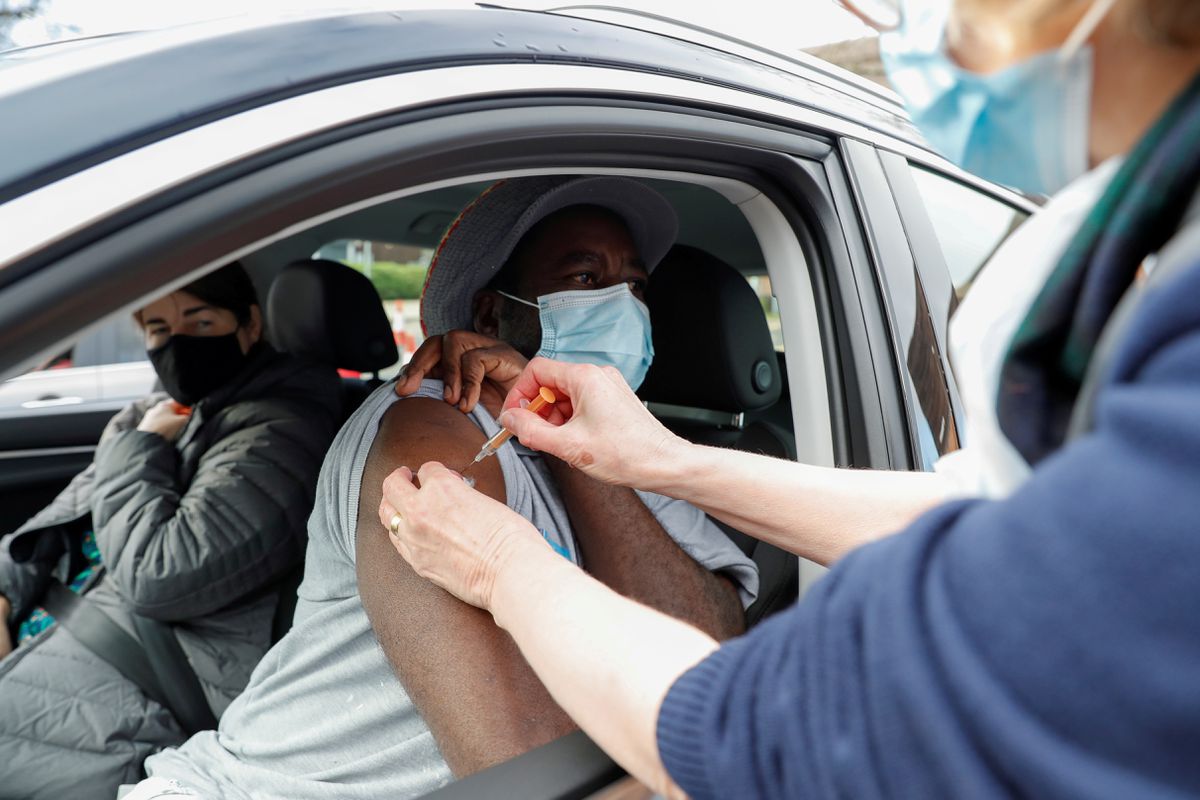 By Friday, the U.K. had administered 11 million COVID-19 vaccine doses, equivalent to 16.5 per cent of its population. Israel’s figure was a world-topping 58.5 per cent. Even America had managed to inoculate 11.2 per cent of its people.

And the European Union?

According to the Bloomberg Vaccine Tracker, the EU’s vaccination rate had reached a mere 3.4 per cent, and France’s was a miserable 2.8 per cent. At that pace, it would take years to reach 75 per cent or more; whereas at Britain’s pace, it should be able to give the first dose of the approved two-dose vaccines to virtually its entire population by the summer.

The EU’s vaccine rollout has been a travesty of epic proportions. Manuela Schwesig, president of the German state of Mecklenburg-Vorpommern, went on TV to vent her anger about the lack of doses. “Even the United States under [former President Donald] Trump had obviously done a better job,” she said.

Her ire was directed at Ursula von der Leyen, president of the European Commission and a former German defence minister, her backer German Chancellor Angela Merkel and their ally Jens Spahn, the German Health Minister and a candidate to replace Ms. Merkel when she steps down in September. Another starring role was played by French President Emmanuel Macron, who is taking heat for France’s slow-motion vaccine campaign and for saying that the Oxford-AstraZeneca jab was “almost ineffective for those over 65” – the data on that matter is inconclusive.

Anyone closely associated with the failing vaccine rollout, including those at the European Medicines Agency (EMA), the EU’s drug regulator, has taken a credibility blow. Some careers may end – there will be blood.

The other victim is the EU itself, of course. Its economic recovery will stall along with the vaccine supply, while quick recoveries are far more likely in economies with fast rollouts.

Already the EU and the euro zone countries are going nowhere, fast. In the euro zone, GDP fell 0.7 per cent in the most recent quarter, and some economists think the first quarter of 2021 will see negative growth, too. In the U.S., fourth-quarter growth was 4 per cent. The euro has been sinking against the dollar, and this week former European Central Bank boss Mario Draghi was press-ganged into Italy’s premiership with the full support of business leaders, who are desperate for a government that might spare the country from economic collapse.

How did the EU’s vaccine strategy go so wrong? The wounds seem largely self-inflicted.

In a power grab that seemed to make sense at the time, the European Commission installed itself last summer as the vaccine buyer for the entire EU. As the EU’s executive arm, it would have the clout to negotiate bargain supply contracts with Big Pharma. Never mind that the EC had no experience buying vaccines en masse; previously, that job was left to the individual states. In November, Ms. von der Leyen used a speech to boast: “We have taken the first steps to establish a European health union.”

By then the EC was well behind in the inoculation game. Britain had used emergency override powers to approve the AstraZeneca vaccine (it was still technically part of the EU then) and sign a supply contract three months before the EC did. Other individual EU countries could have done the same, but chose to wait until the EMA signed off on the vaccine. But the agency was slow off the mark.

The EC also wasted precious time haggling over price and liability – the right to sue the manufacturer if the vaccine were to produce nasty side effects or death. Britain and the U.S. took the view that too many people were dying too quickly to get caught up in lengthy liability negotiations.

If the EC’s and the EMA’s excessive caution were not bad enough, another issue arose when supply problems with the AstraZeneca and the Pfizer/BioNTech vaccines meant the EU failed to get all the shipments it expected. At that point, the EC went into a near panic, threatening to use a Brexit clause to prevent EU vaccine exports from entering Britain via Northern Ireland.

The ploy backfired spectacularly, and EC officials were left blaming others. The overall image was one of incompetence. By Friday, as vaccine shortages mounted, Josep Borrell, the EU’s top diplomat, urged the EU to approve Russia’s Sputnik V vaccine to help fill the gaps. A peer review in The Lancet medical journal found that the two-shot product has an efficacy of almost 92 per cent.

The EU’s slow vaccine rollout will have terrible consequences. It will result in more deaths and more pressure on ICUs. It will also delay the economic recovery. Meanwhile, British Prime Minister Boris Johnson is gloating, even though his early response to the pandemic was slow and chaotic. EU membership doesn’t always have its advantages.