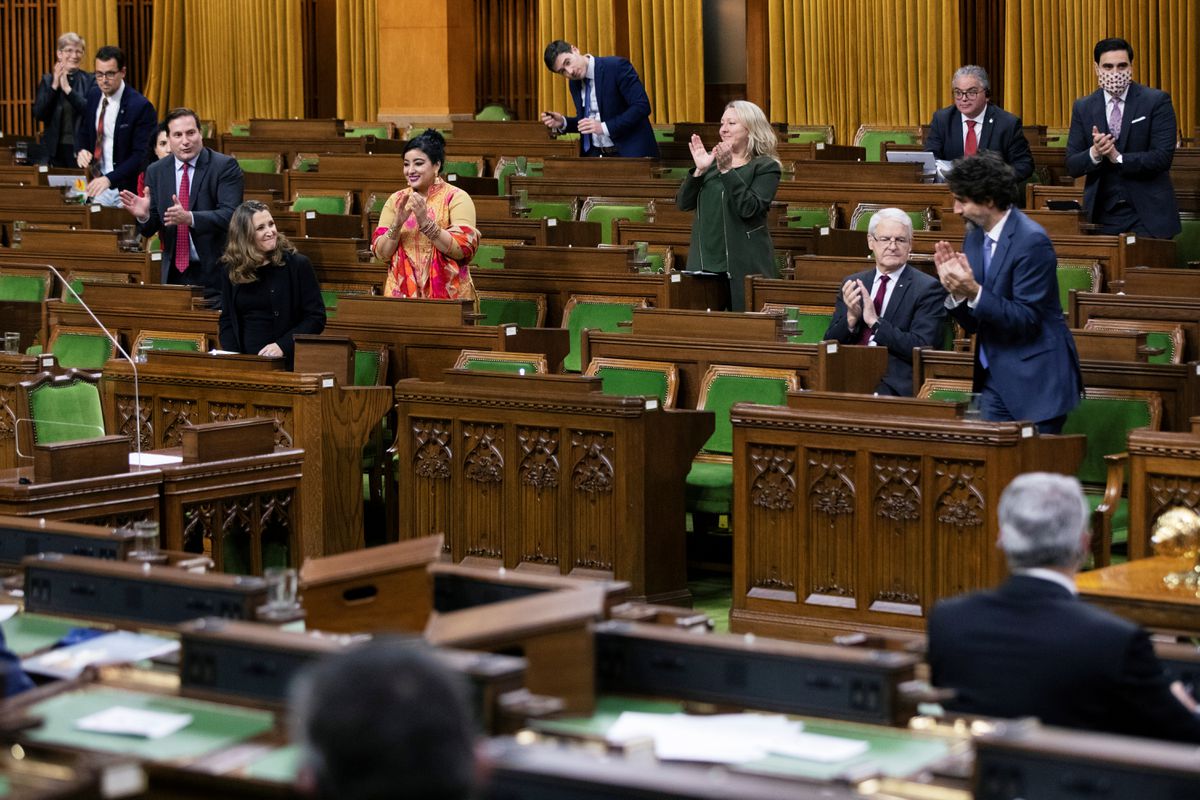 The federal Liberals have defended their record-busting deficit spending during the pandemic with the rationale that the government is taking on debt so that Canadians won’t have to, a line of reasoning that again surfaced in Monday’s economic update.

But Ottawa continues to dramatically overshoot that mark, with household income data released Tuesday showing that the emergency support programs rolled out to cushion the economic blow of the coronavirus have outstripped the loss in earnings since the end of March. Ottawa is not only shouldering the potential debts of Canadians – it has borrowed tens of billions of dollars to pad their bank accounts.

Statistics Canada data show that primary household income, or private-sector earnings, barely dropped between the first quarter of 2020 and third quarter, falling by just 1 per cent, or $15.2-billion to $1.52-trillion. But transfers from government, which include existing programs such as employment insurance plus new coronavirus-era programs, made up for that drop many times over. Those transfers rose by $103.8-billion from the first quarter to the third quarter, meaning that the government effectively gave households nearly $7 for each dollar of lost private-sector income. Those figures are seasonally adjusted and stated on an annualized basis.

Once other costs are taken into account, household disposable income rose 7.6 per cent between the first and third quarters, while edging down slightly from the second quarter, when the imbalance between income losses and government transfers was even greater. Canada is virtually alone in seeing such a spike in household income, with only the United States coming close to matching that surge. (Both countries placed much more emphasis on sending funds to individuals rather than the wage subsidies that were the policy focus in other advanced economies.)

For some economists, the extra billions of dollars sent to households is proof that the new income support programs are simply too generous, and exceed the goal of protecting Canadians from an economic catastrophe. “We probably went overboard with too much spending,” said Jack Mintz, president’s fellow at the school of public policy at the University of Calgary.

However, economist Armine Yalnizyan said the fact that support payments have been larger than income losses was justified by the need to keep workers at home during the pandemic. That need persists, she said. “We’re not through the pandemic,” said Ms. Yalnizyan, an Atkinson fellow on the future of workers. “The fall is not the time to end it.”

Mr. Mintz said the excess in payments likely stems from the structure of the Canada Emergency Response Benefit, which paid a flat $500 to qualifying recipients, no matter what their employment income was. That meant low-paid workers, especially those with part-time jobs, could see their incomes rise. Self-employed workers only had to attest that they had lost at least half of their income, giving them the opportunity to add CERB payments on top of their remaining earnings and thereby boost their total income. One caveat: The Statistics Canada figures don’t take into account the taxes that CERB recipients will eventually have to pay, although Mr. Mintz said he believes that Ottawa will eventually feel pressure to waive those tax debts.

Statistics Canada figures do not break down the quarterly household income figures by income levels. But a Bank of Canada research paper released last week said that CERB had more than replaced the lost wages of low-paid workers.

The Liberals did attempt to scale back income supports when launching the Canada Recovery Benefit this fall, initially proposing a $400 floor for payments for the program that launched Oct. 1. But that minimum was boosted back to $500 after discussions between the minority-government Liberals and the NDP.

But the government gave no indication on Monday that it has any intention on scaling back the CRB or other income support programs. Instead, it said the resulting extra savings were “a preloaded stimulus Canadians will be able to deploy” to boost the economy, while asserting that rapidly rising federal debt levels are sustainable because of low interest rates.

Benjamin Tal, deputy chief economist at CIBC World Markets, said it is true that reductions in benchmark interest rates earlier this year have pushed down borrowing costs for the federal government, even with record deficits. But he cautioned that the government cannot simply assume that will remain true. Interest rates could rise and markets might demand premiums for jurisdictions seen to have riskier fiscal paths. “Sustainability also means potential risk,” he said.

Rebekah Young, director of fiscal and provincial economics at the Bank of Nova Scotia, also questioned the government’s assurances that its debt burden is sustainable, while acknowledging that debt costs are low at the moment. One concern is spending beyond what is contained in the economic update. Costs for broad commitments in the Speech from the Throne such as pharmacare and a larger federal role in child care are not included, for instance.

The assumption that interest rates will only slowly rise from their historic low levels may be overly rosy, she said, noting that the private-sector economic forecasts from September used in the Monday economic update were prepared before viable vaccines emerged. Those vaccines could shorten the pandemic and boost economic growth: good news, but a trend that could reignite inflation worries and push up interest rates. Similarly, the possibility of a break in the impasse over U.S. economic stimulus could further stoke growth and inflation concerns.

But Ottawa’s most volatile issue may be the assumption that markets will not react to mounting debt levels in Canada. Ms. Young said there is not much danger at the moment of international lenders demanding higher interest rates on Canadian-issued debt because of perceived fiscal risks. But that situation may change if other countries start to pull back fiscal stimulus and lay out a path to smaller deficits and Canada has not yet provided a plan. “Nobody knows what the ceiling is,” she said. “Once you’re there, you’ll know it – and it will be too late.”

Tax and Spend is a weekly series that examines the intricacies and oddities of taxation and government spending.