Is an economic recovery priced into markets? Market experts weigh in 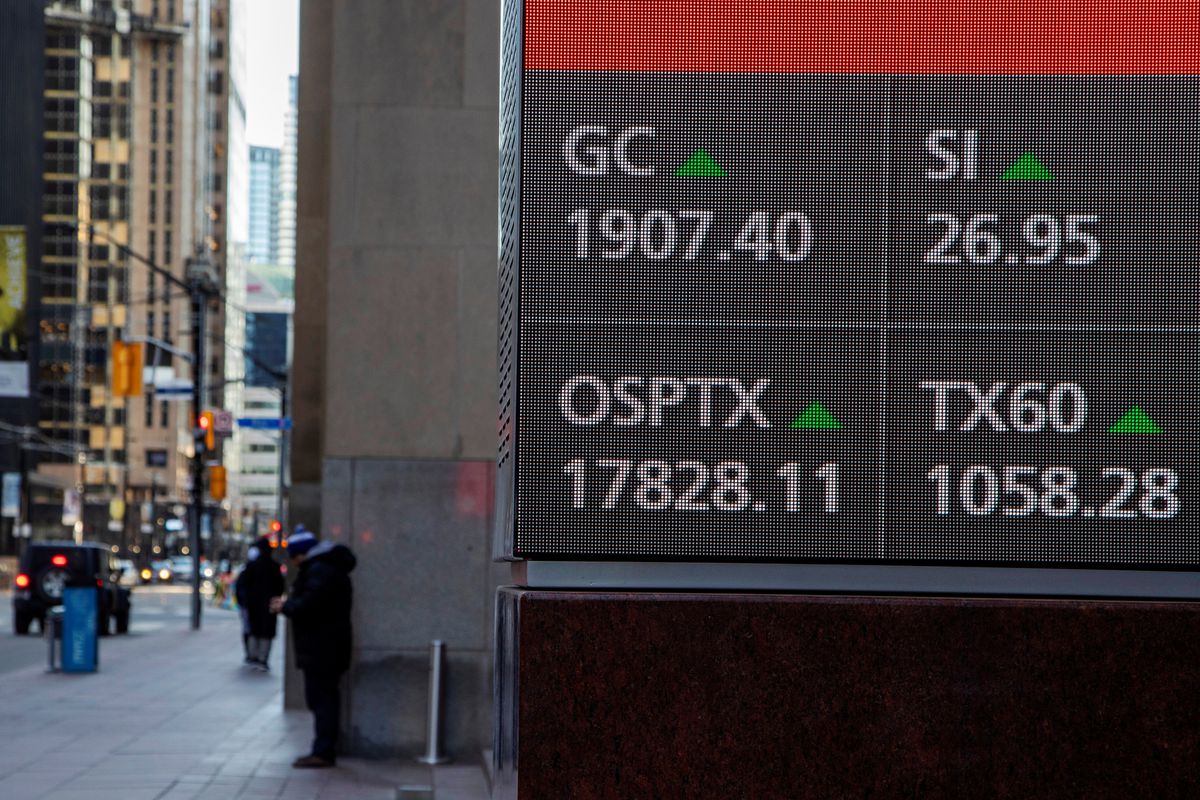 Value stocks, those chronic underperformers of the market that suffered a further blow as the pandemic took hold last year, have been on the comeback trail in 2021.

Often belonging to cyclical industries linked to the gyrations of the economy, value stocks attracted investor interest as the deployment of COVID-19 vaccines built confidence that business and life were set to eventually return to more normal conditions. At the same time, the fast-growing, pricey technology and stay-at-home stocks that were the market’s darlings at the start of the pandemic have lost some of their appeal.

So far this year, the MSCI World Value Index is up about 10 per cent, compared with a decline of 0.4 per cent for its growth counterpart, as of Tuesday in U.S. dollars.

This has translated into a solid start for the S&P/TSX Composite Index this year relative to the much larger and flashier equity market south of the border. The Canadian benchmark is up 8.9 per cent so far this year as of Thursday – ahead of the S&P 500 index’s 7-per-cent rise – thanks in large part to its heavy weighting in sectors considered more value than growth: financials, industrials, materials and energy.

But over the past few weeks, that rotation into value has started to wobble, with cyclical and growth names trading places almost daily as the market’s best performers.

Money managers are debating whether the latest market moves are a sign that the economic recovery that’s widely expected in the months ahead is now nearly fully priced into markets. And where will the 10-year U.S. Treasury yield, so influential in setting the direction of stock markets and which hit fresh 14-month highs above 1.7 per cent on Tuesday, head next?

Here are what several market strategists and portfolio managers are thinking.

There’s a lot of optimism of an economic reopening [that is] priced into the broader market, when we look at traditional measures of valuation such as current price-to-earnings ratios. However, should we continue to see the vaccination rollout as scheduled, and we are able to get back to normal life, we can really see earnings for companies accelerate in the second half, particularly with so much pent-up demand.

We believe value stocks have more room to run. They typically tend to outperform for the first several years coming out of a crisis, as they are trading at a lower valuation for a reason. Most [value stocks] have been more negatively impacted by the lockdowns, so they are now more leveraged to benefit from that economic reopening trade.

We believe the 10-year U.S. Treasury yield probably ends the year between 2.25 per cent and 2.4 per cent. Asset allocators are probably already seeing some value with the current level in bonds, and if yields go up any more, they may likely start taking some risk off the table by moving equities into fixed income, which will naturally put a lid on how far yields can rise.

If not, the Fed can also implement an Operation Twist similar to in 2011 [when the central bank sold near-term Treasuries to buy longer-dated ones], in order to flatten the yield curve. If yields rise too far and too fast, it can potentially stall the economic recovery as it can limit demand for loans and mortgages. So the Fed does have additional tools to work with should interest rates not level off naturally.

Looking at the fact that we have a S&P 500 price-to-earnings multiple on 2022 earnings – not this year, but next year – of over 19 times, you know a whole lot of positive earnings news is in the price.

From an investment perspective, I am concerned that this “reopening trade” has taken on a gospel-like character driven by speculative fund flows – investors have plowed US$11.5-billion into U.S. large-cap value exchange-traded funds this year, versus nearly US$4-billion in outflows from similar growth funds. As one speculative fervour ended, another one has begun.

The Treasury market right now has the same peak inflation and funds rate priced in that we experienced in the last cycle when the unemployment rate hit a 50-year low of 3.5 per cent. The bond vigilantes have decided to wage war with the Fed, and more often than not, it is the central bank that comes out on top. So I would say that at a minimum, bonds are fair value where they are priced right now.

We continue to believe that infrastructure [spending] is not at all a sure thing and that the U.S. economy will relapse once this gargantuan stimulus cheque program runs its course, and that the savings rate will stay elevated at a higher level and for longer than the consensus believes. But our view will have to wait until the second half of the year to play out. Investors are treating the reflation/inflation view as a sure thing and there is no such thing as a sure thing.

[The 10-year bond yield’s] rapid increase reflects growing optimism about robust economic growth once the economy reopens. However, I believe it can rise significantly higher in the next several months as the economic outlook improves. Similarly, the rotation into value and cyclical names reflects that same expectation about a solid economic recovery. I don’t believe the robustness of the recovery is fully priced in; that should send value and cyclical stocks significantly higher in the next several months.

We might see another leg up in the fall where the 10-year rises to as high as 2.5 per cent or even a bit higher; however, I would expect it to settle down closer to 2 per cent [at year end] as there is recognition that the surge in spending is relatively short-lived, and that conditions such as higher taxes and a high government debt burden are likely to weigh on economic growth over the longer term. We also have to recognize that if the 10-year yield were to rise high enough and create ‘disorderly conditions’ in markets this year, the Fed is likely to step in with some tool such as Operation Twist, which would likely take down yields to a lower level that is more palatable to markets.

We believe the reopening trade is getting overdone but for a specific reason – a lot of the major momentum strategies and exchange-traded funds will be rebalancing in the next few months, and if nothing changes they will be switching from a predominantly tech portfolio to more cyclical holdings. Funds know they will have a ready and willing buyer to sell to at any price.

We are also watching a strong bottoming formation in the U.S. dollar, which could also be a negative for hard asset plays. Because of this, we believe that the cyclical rotation and rapidly rising rates will last another month or so, and then the boat will steady itself and the world (in almost all things) will return to normal.

We think the market is searching for something [negative] in a sea of green shoots, and the rapidly rising 10-year yield is the most obvious one on which to focus. If we look a little closer, however, the 10-year is just now hitting levels we were at pre-COVID, representing an asset class that took a longer time to normalize.

Going forward, we know the narrative is that with the amount of money supply growth, inflation will take hold and yields will just continue to rise. However, we think the rate of change is just as important as the trajectory, if not more so, and we believe it will begin to slow.

The U.S. still has an employment and productivity issue, and the massive investment in technology will continue to create efficiencies that should help with long-term inflation rates.

Stock markets have further upside as long as profit expectations are met and corporate profits continue to grow into next year. The S&P 500 index is about 17 per cent above [its February, 2020] prepandemic high, with a price-to-earnings of 22.5 times based on consensus 2021 earnings. The S&P/TSX is about 4 per cent above [its February, 2020] prepandemic high, with a P/E of 17.3 times consensus 2021 earnings. The relative underperformance of the TSX from prior highs combined with a lower P/E multiple suggests there is still more room for the valuation gap between growth and value stocks to narrow. With the vaccination rollout, particularly in the U.S., occurring at a quicker pace than originally expected, the trajectory of the economic recovery is also steeper than expectations at the start of the year. Household net worth in both Canada and the U.S. are at record highs, so consumers are well positioned to deploy spending as economies and service industries reopen.

I expect the [U.S. 10-year] yield to continue to move upwards as economies reopen, pent up demand kicks in and the U.S. economy strengthens. Inflation will be a key driver of the bond yield and even the Fed expects inflation to accelerate (temporarily) this year and then recede back to the 2 per cent level.

Given how broad-based we expect the restart to be, the likely magnitude of the pickup in economic data may still be underappreciated. We express our cyclical tilt through an overweight in small-cap stocks, and remain neutral on value, which we upgraded from underweight in the second half of last year.

We have been underweight U.S. Treasuries for the past quarter. Even though in the medium term we expect yields to push higher, our belief is that a large part of the repricing has already happened.

Responses have been edited and condensed.