Sonu Sood has won praise all over for helping out migrant workers in the crisis at the time of the Coronavirus pandemic. The actor recently paid a surprise visit to a roadside food stall set up in his name in Hyderabad. ‘Sonu Sood Fast Food Stall’ was the name of the eatery set up by one of the actor’s fans in the city. Sonu Sood indeed surprised everyone with his visit, and a video of his interaction was shared on social media too. Take a look:

Sonu Sood revealed that he had spotted the stall online, which prompted him to pay a visit and try the food. “Today I got a chance to visit and I ate Egg Fried rice and Manchurian here,” he told ANI. The actor interacted with fans and followers at the eatery, who were stunned by his presence. He also delighted people by trying his hand at cooking some wonderful dishes.

This is not all that Sonu Sood’s fans have done for him. The actor was honoured by a temple being erected by a local citizen in Siddipet, Telangana. “I feel happy that people have shown so much love. I would definitely visit the temple in Siddipet. I am a very common man, not a temple but love must be maintained by people,” he said.

(Also Read: Food For Thought: 9 Big Gestures That Made The Internet Smile In 2020) 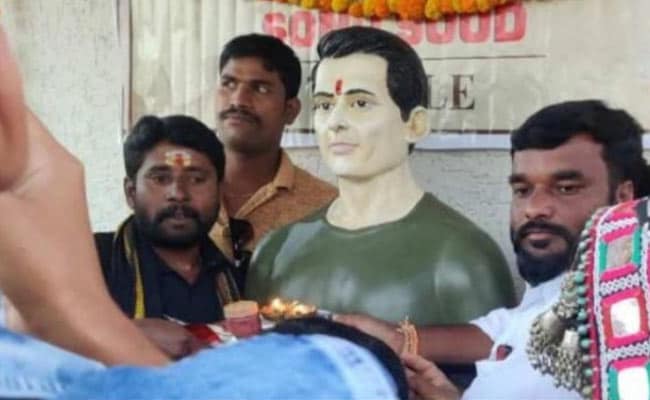 On the work front, the ‘Dabangg’ actor will next be seen in ‘Acharya’ which is an upcoming Telugu action film being produced by Ram Charan. He has also launched his own autobiography, ‘I Am No Messiah’ which documents his journey from Moga to Mumbai.