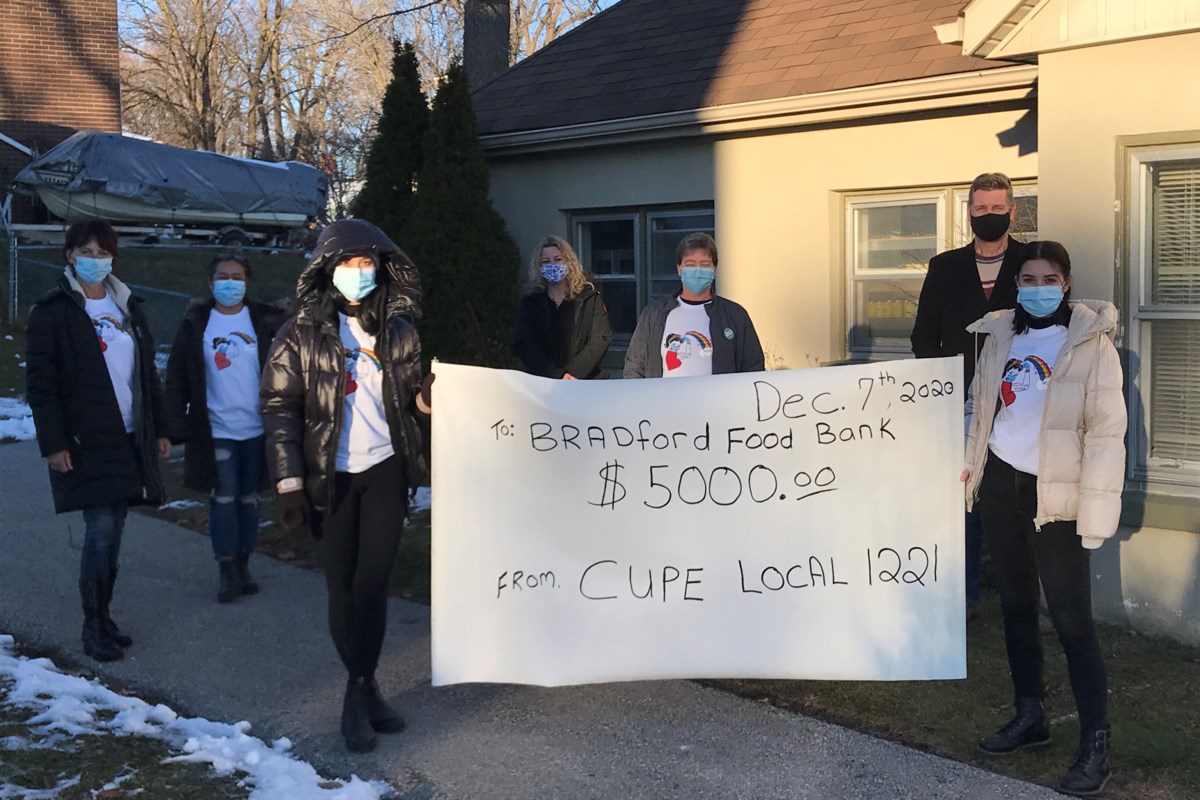 Members of CUPE Local 1221 (Canadian Union of Public Employees) who work at the Bradford Valley Care Community longterm care facility donated $5,000 to the Helping Hand Food Bank on Monday afternoon as a way to say ‘thank you’ to the community for all their help and support.

CUPE Local 1221 wanted to give back to the community after receiving so much help during their fight against a Covid-19 outbreak in the spring. The board and its members voted unanimously to redirect the support back into the community by donating funds to the local food bank.

“It’s been a while since we could do something, but we couldn’t have membership meetings for CUPE due to Covid,,” notes Lana Whiteside, President of CUPE Local 1221. “A motion went to the board to donate to the food bank to say thank you to the community. This was a perfect way to give back.”

The Bradford Valley outbreak was one of the first and biggest outbreaks to hit the town of Bradford when the pandemic first began, and sadly, the virus claimed the lives of 12 residents at the residence back in April.

During the weeks of lockdown, the town of Bradford and its community members came together to help Bradford Valley staff and residents. Overwhelming support came to the facility in many forms, and the staff and members of CUPE would like to say a big thank you to everyone who helped them during a time of crisis.

“The donations we received were so much appreciated,” expresses Whiteside. “It allowed us to focus on the residents and families.”

The town of Bradford provided temporary housing to some of the Bradford Valley staff who were battling infection from the virus and were unable to live in their own houses at the time of the outbreak.

The Bradford Lion’s Club delivered coffee and muffins from Bradford’s McDonalds every day and Sienna Corporate provided meals twice daily to the staff and residents.

Lois DeBeaucamp, former CUPE member, made endless phone calls and arranged the majority of the food that was donated to them.

“Your time, energy, and thoughtfulness will never be forgotten,” expresses Whiteside.

Community members and local businesses donated face masks, N95’s, hair caps, and face shields during the initial outbreak, while other residents did ‘drive bys’ and waved to residents from their windows in an effort to send some ‘cheer’ from a distance.

“We would like to say thank you as well to the management and non-management staff at Bradford Valley for working side-by-side with us on the floors,” shares Whiteside. “And to our own families, for their love and support and understanding while we were away from them, working longer hours than normal.”

Whiteside adds that there were many other local restaurants and businesses who showed support during their outbreak, and a heartfelt thank you goes out to all those who helped them over the six-week ordeal.

“Most of all we want to thank the residents and families for their patience, support, and understanding,” expresses Whiteside. “All you people have kept us going.”