The name Woodward’s on its own is iconic in Vancouver. The department store that began in 1892 on the corner of Main and Georgia streets evolved to be a major retailer in Western Canada, until its eventual demise in the 1990s.

Though many recall the catchy “$1.49 day” jingle, or the giant W atop the store’s landmark Hastings and Abbott location, for some, memories of Woodward’s are rooted down on the lower level and inside the Food Floor.

A world-class grocery store that took customer service to heart and turned shoppers on to ingredients from around the globe that were then hard-to-find or exotic, the Woodward’s Food Floor was more than just a place to pick up dinner fixings – though it most certainly was that, too.

Local author Margaret Cadwaladr released a slim tome earlier this year that recalls her own “Woodward’s Days,” as a uniformed clerk at the storied market.

Cadwaladr took a job at the Woodward’s Food Floor right out of high school in 1967 and stayed on until her University graduation in 1971. She held her post at the Gastown flagship store, and in her memoir takes the reader through not only the paces of her job but also the Vancouver of the era. 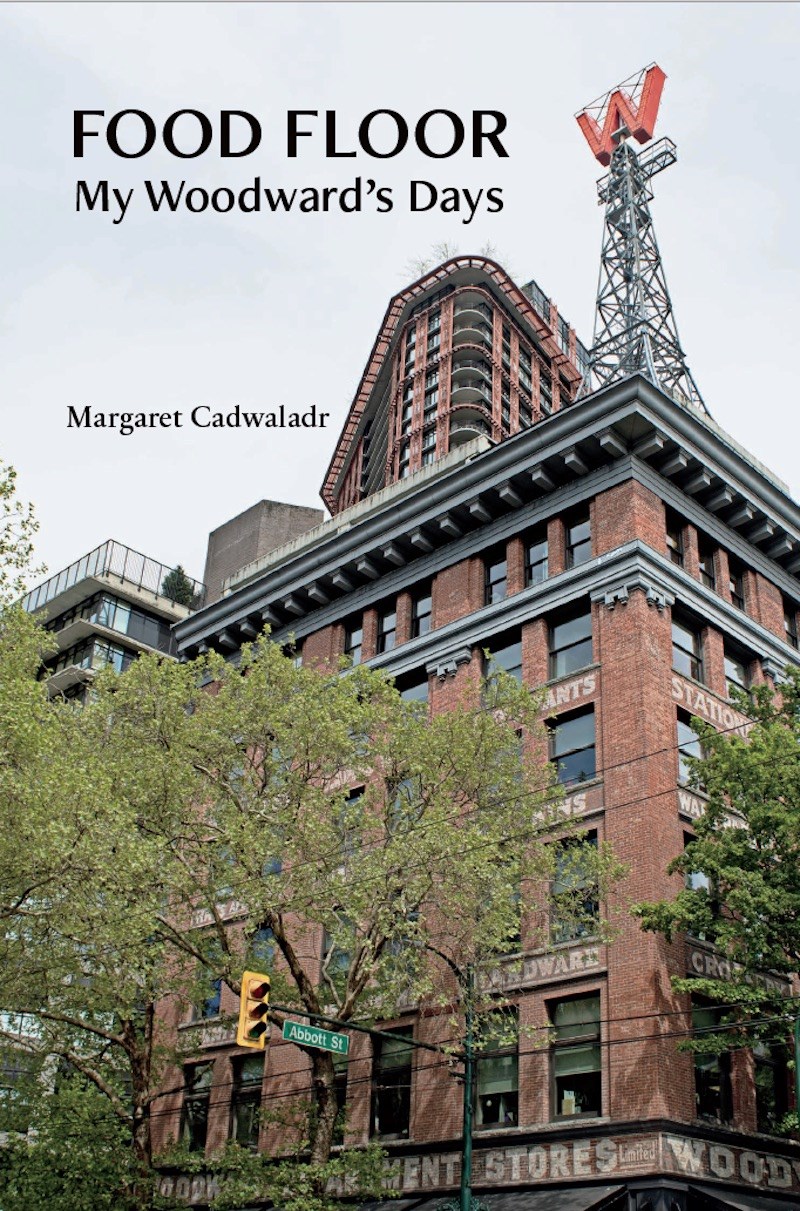 The book is packed with images of the store, products, and ephemera from other former employees (like charge plates, bags, and pay stubs). Cadwaladr told Vancouver Is Awesome in an interview that she spent several months searching for the images and the items photographed for the book.

“I bought bags, labels, bills, and coins from the era from flea markets and thrift shops and photographed these,” explains Cadwaladr.

“I had some items around the house, including several recipes from Bea Wright’s Kitchen,” adds the author, referencing the Woodward’s Food Floor in-house recipe program that released coloured newsletter-style sheets on different kinds of “cookery.” (You can see one such sheet here, via the Museum of Vancouver.)

Cadwaladr also dug into the Museum of Vancouver, Vancouver Public Library, and City of Vancouver Archives to get the incredible historic images, and worked with book designer John McKercher, who put all of the images together.

When it comes to those recipes and the many global ingredients Woodward’s stocked, Cadwaladr says that she, too, tried out Bea Wright’s recipes back when she was an employee and in the years after. While working on the book, Cadwaladr says she purchased Cooking With Mona, the cookbook published by Woodward’s longtime food consultant Mona Brun.

“The recipes stand the test of time and I have recently tried several,” she attests.

A place to buy ingredients that were ‘exotic at the time’

The Food Floor stocked hard-to-find ingredients that to the present-day shopper might be the kinds of easily-obtained items at any typical or specialty store. Just check out a thread on a local history Facebook page and read about the powerful memories of fresh donuts out of the fryer, Black Forest cakes, rare finds like dulse, and Woodward’s own house-brand items like canned goods and their famous peanut butter. 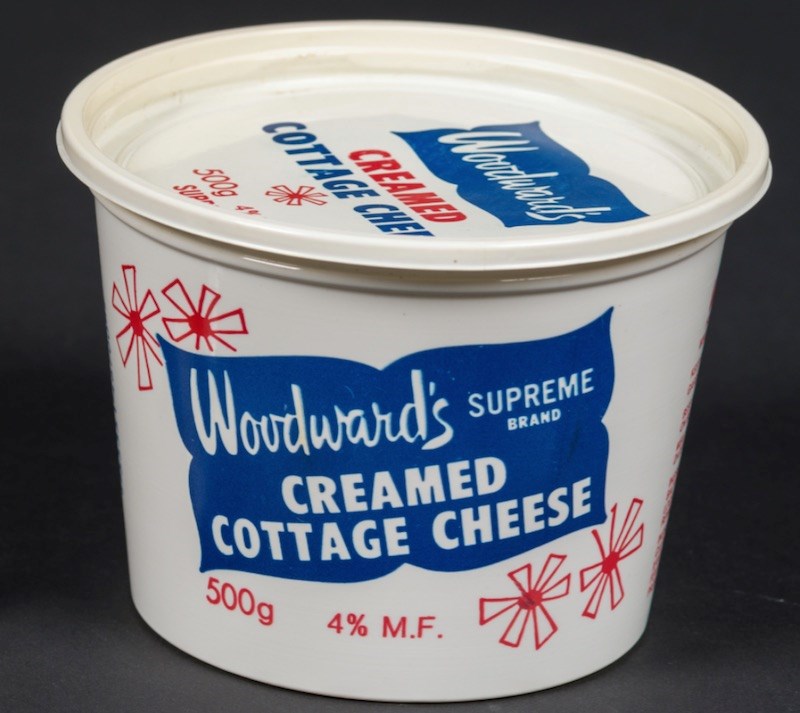 “I especially enjoyed different ethnic foods,” recalls Cadawaldr, adding that “many of the items seemed exotic at the time.”

In an era marked by “globalization, immigration, increased travel, and the popularity of cooking shows on television starting with Julia Child,” Cadawaldr says she remembers “folks from Britain bought Marmite and biscuits while there was a huge selection of sauerkraut and sausages that appealed to Eastern Europeans.” You could even purchase oolichan, a kind of fish used by regional First Nations members.

“Oddly, one of the foods that sticks in my mind as a ‘discovery’ was Best Foods mayonnaise. It was always on the list when I picked up orders for [grandson of Woodward’s Charles A. Woodward] Chunky Woodward. After tasting it, I disliked the generic salad dressing my mother tended to use!”

And of course, for others, “Food Floor” was synonymous with the grocer’s delivery offerings, as well as their conveyor belts, used to whisk away paid-for and bagged goods from inside the store headed for delivery trucks or the customers’ own vehicles. I have my own faint childhood memories of the Food Floor at Lansdowne in Richmond and its conveyor belt, but Cadawaldr’s book has enjoyable behind-the-scenes accounts of the unique grocery-moving system.

The end of Woodward’s

Woodward’s Food Floors eventually began to drop off as the department store lost its footing in the retail scene; Cadawaldr even went back and worked as a cashier again in 1987 for a short while during the time the store was in financial trouble, though things were vastly different from her first tenure: “It was sad, one would come to work, and the meat department and other parts of the food floor were greatly diminished in size,” she elaborates. Take a peek inside a Food Floor location via this 1985 TV ad for the store. 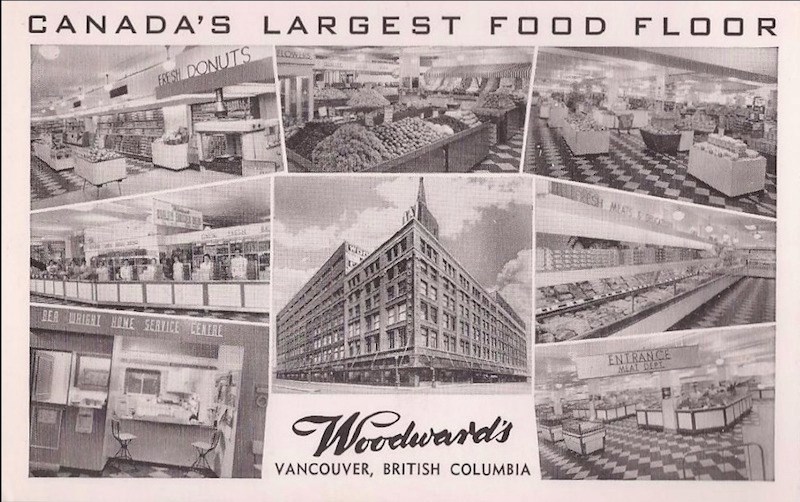 The flagship building at Hastings and Abbott was famously brought down in 2006 (you can watch that here), though the new building in its stead keeps the memories alive through a number of nostalgic touches, like the old tiled sidewalk sign for the store, the preserved giant red “W” and the descriptive panels on the exterior that include details about Woodward’s history. Nester’s, the B.C. supermarket chain on the ground floor at the new site, also still stocks a “Woodward’s” branded natural peanut butter – and it costs just $3.49 a jar. Not quite $1.49, but the price is sure to bring a smile.

Cadawaldr also has been back to the site of late, and was newly-inspired to put together her book.

“I lived on Vancouver Island for several years and only visited the new complex when I started writing the book,” she says. “I was glad to see the historic W in the courtyard and was quite impressed with the huge atrium. As I noted in the Introduction, however, it seemed there was little to recall the nostalgia and affection many feel for the store. That became part of my motivation for writing the book. I am glad to say, the book is now for sale at Nester’s market at the complex. “

The present-day concerns of those living in Vancouver were also front-of-mind for Cadawaldr as she wrote her book.

“The city has changed so much in recent years, and Woodward’s represented something simpler and familiar to long-time Vancouverites. Nostalgia is comforting, especially during the pandemic and other troubling events of today.”

Food Floor: My Woodward’s Days by Margaret Cadwaldr is available from Madrona Books & Publishing directly, Nester’s Woodward’s, as well as from Indigo and Amazon.ca.