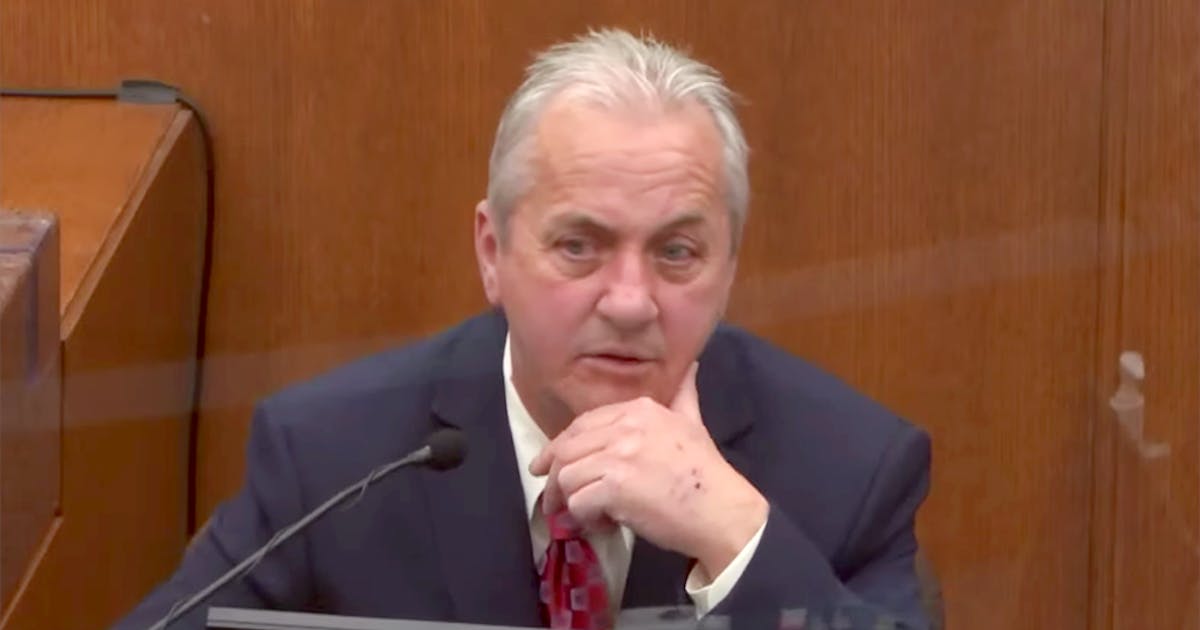 “First of all,” Lt. Richard Zimmerman said during Chauvin’s murder trial in Hennepin County District Court, “pulling him down to the ground facedown and putting your knee on a neck for that amount of time is just uncalled for.”

The head of the Police Department’s homicide unit added, “I saw no reason why the officers felt they were in danger if that’s what they felt, and that’s what they would have to have felt to have to use that kind of force.”

In your opinion, should that restraint have stopped once he was handcuffed and prone on the ground?

Zimmerman said department policy requires that prone suspects who are handcuffed — as was Floyd on the night of his death — must be taken off their chest as soon as possible.

The lieutenant went through the Police Department’s use of force policy and brought up several provisions that run counter to what the prosecution is contending Chauvin and other officers did wrong on May 25, when Floyd was kept-face down and cuffed behind his back for more than nine minutes as he became unresponsive and died later that night.

Prosecutor Matthew Frank asked Zimmerman whether he was ever trained to put a knee on the neck of someone in handcuffs.

Zimmerman said such a tactic would fall under the most extreme level of force by an officer, that being “deadly force.”

“If your knee is on someone’s neck, that could kill them,” he said.

Frank then asked how much a threat a suspect would be once handcuffed.

“The threat level goes down all the way,” the lieutenant said. “They are cuffed; how can they hurt you? … You getting injured is way down,” apart from possibly getting kicked, he continued.

Under cross examination, defense attorney Eric Nelson noted that Zimmerman has not worked as a patrol officer for several years and does not teach defensive tactics. He also noted that police officers sometimes need to “improvise” to protect themselves regardless of training.

“You would agree, however, in a fight for your life, you as an officer are allowed to use whatever force is reasonable and necessary, correct?”

“Minneapolis Police Department policy allows an officer to use ‘whatever means available’ to protect yourself, correct?” Nelson asked.

The lieutenant under questioning acknowledged that handcuffed suspects can still pose a danger.

“That person can continue to thrash his body around, correct, and part of the reason police officers restrain people is for their own safety, correct?” Nelson asked.

The prosecution rose again and sought to undermine several of the defense’s points raised while questioning Zimmerman.

Most notably, Frank asked the lieutenant whether he found the circumstances of Floyd’s arrest called for Chauvin “to improvise by putting his knee on Mr. Floyd for 9 minutes and 29 seconds?” To which Zimmerman replied, “No, I did not.”

Zimmerman also said his review of police body camera video revealed no kicking by Floyd once he was subdued on the pavement.

Judge Peter Cahill adjourned proceeding for the day shortly after 11:30 a.m. once Zimmerman was done testifying and said court would reconvene Monday morning.

The first witness called Friday was Jon Edwards, a Minneapolis police sergeant, who has been on the force since 2007.

Edwards said he was just beginning his shift on the night of May 25, when he was alerted by the previous shift’s supervisory sergeant that Floyd “may or may not live.” Edwards added that he was directed to the intersection where Floyd was arrested “just in case we had to secure that area and make contact with any of the officers” still there.

Edwards said he got to E. 38th Street and S. Chicago Avenue about 9:30 p.m., met with officers J. Alexander Kueng and Thomas Lane, who ordered them to turn on their body-worn cameras. The officers then explained where they interacted with Floyd. Edwards said he directed them to up crime scene tape to “preserve any potential evidence that was there.”

He ordered them out of their squad and began canvassing witnesses. He encountered Charles McMillian, one of the first witnesses to Floyd’s detainment and death who testified earlier this week. At the time, McMillian refused to give Edwards his name or provide information.

“I told him he would be very valuable if he would provide us with information,” Edwards said. “He told me he refused to say anything and wondered if he was under arrest; and I told him no, and he told me he wanted to leave.”

Edwards explained that state Bureau of Criminal Apprehension personnel arrived and took over control of the crime scene as Kueng and Lane were escorted to City Hall for a debriefing. The officers’ squad and Floyd’s SUV were towed away by the BCA as evidence in what was classified as a “critical incident.”

The sergeant’s testimony helped lay a foundation for the testimony of Zimmerman, who worked in the homicide unit at that time and joined Edwards and the other officers the scene of Floyd’s arrest.

Zimmerman testified that he was at home when he learned of the incident and his presence at the intersection was needed.

The lieutenant arrived and asked, “What’s going on?” to law enforcement on the scene, according to officer bodycam footage shown in court.

Zimmerman located Kueng and Lane, then “determined they were involved officers” connected to Floyd’s arrest, he said.

“We needed some more people out here,” Zimmerman testified telling Edwards, as well as “we need to get these two guys downtown” for their debriefing.

On Thursday, jurors heard from a supervisory sergeant that Chauvin downplayed his actions, at first not disclosing that he used his knee to restrain Floyd, and later that night after Floyd was taken to HCMC making that disclosure to his boss but failing to say for how long.

Recently retired supervisory Sgt. David Pleoger spoke to Chauvin on a cellphone that night after receiving a call from a 911 dispatcher about a possible use of force by officers seen on city surveillance cameras.

Pleoger’s body-worn camera captured his initial phone conversation with Chauvin, who said, “Had to hold the guy down, he was going crazy … wouldn’t go in the back of the squad.”

Pleoger testified during livestreamed proceedings being viewed around the world that Chauvin didn’t say anything about putting his knee on Floyd’s neck. Prosecutor Steve Schleicher then pressed Pleoger on whether Chauvin’s force was appropriate.

“When Mr. Floyd was no longer offering up any resistance to the officers, they could have ended their restraint,” Pleoger said as he offered the first account of Chauvin’s words and behavior in the immediate aftermath of Floyd’s death.

He testified that Chauvin told him that Floyd “became combative … after struggling with him. He suffered a medical emergency, and an ambulance was called.”

Also testifying were the two paramedics and a fire captain who responded to the scene that night. Derek Smith, a paramedic, checked Floyd’s carotid pulse and pupils as he lay motionless under Chauvin’s knee.

“I looked to my partner. I told him, ‘I think he’s dead, and I want to move this out of here and begin care in the back [of the ambulance],’ ” said Smith, noting the agitated crowd of bystanders. “In a living person, there should be a pulse there. I did not feel one. I suspected this patient to be dead.”

Smith told the court that despite never sensing a pulse, they continued trying to save Floyd. “He’s a human being,” Smith said. “I was trying to give him a second chance at life.”

Fire Capt. Jeremy Norton testified about meeting up with the ambulance at E. 36th Street and S. Park Avenue, where he saw Floyd being treated by the paramedics and Officer Thomas Lane.

“He was an unresponsive body on a cot,” Norton said of Floyd.

After Floyd was brought to the hospital, Norton told his department supervisors what happened. “I was worried that a man had been killed in police custody,” Norton said.

The day’s testimony started with 45-year-old Courteney Ross recalling her relationship with the strong, physically active man she called “Floyd.”

Ross talked about their mutual oxycodone addiction that started with prescriptions for chronic pain and led to purchasing street drugs. She said they were off and on the drugs and by May she believed Floyd was using them again.

The defense is trying to raise the possibility that Floyd died of a drug overdose from pills obtained by Morries Hall, who was with Floyd at Cup Foods the day he died.

Ross said she and Floyd got pills in May that reminded her of “the same feeling” she had from similar pills she took in March, a stimulant that kept her up all night and left her jittery.

Chauvin is charged with second-degree murder, third-degree murder and manslaughter. The other officers on the scene, Lane, J. Alexander Kueng and Tou Thao, are expected to go on trial in August on charges of aiding and abetting Chauvin.