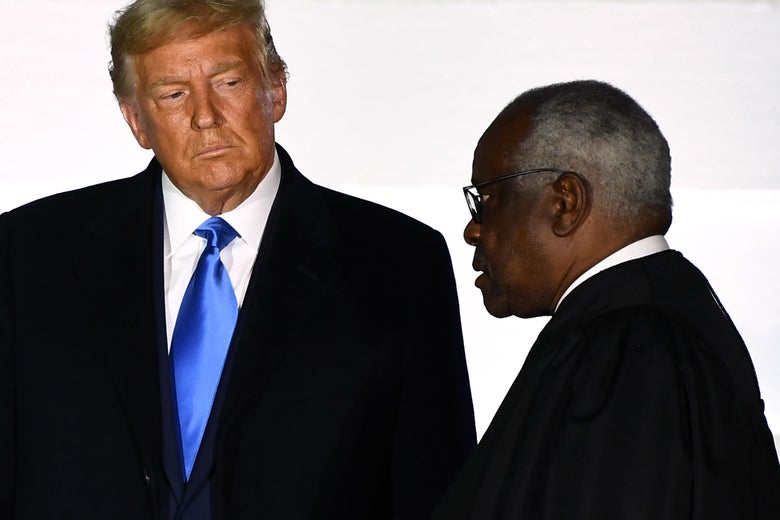 Justice Clarence Thomas is not backing down from the fight to legitimize Donald Trump’s claims that the 2020 election was rife with fraud. On Monday morning, Thomas issued a startling opinion ranting against the alleged dangers of mail voting and declaring that SCOTUS must override state courts that expand vote by mail pursuant to their state constitutions. Trump may be out of office, but his staunchest ally on the U.S. Supreme Court is carrying on his assault on the legitimacy of the election.

Thomas’ grievances arise out of two identical challenges to Pennsylvania’s election procedures. The state Legislature set a strict deadline for mail voting: Any ballot received after 8 p.m. on Election Day must be thrown out. In September, the Pennsylvania Supreme Court held that, in light of the pandemic and the Postal Service slowdown, this deadline would disenfranchise many voters through no fault of their own. Specifically, the court found that the deadline violated the Pennsylvania Constitution, which requires that all elections be “free and equal.” To safeguard this right, the majority extended the mail ballot deadline by three days.

A daily email update of the stories you need to read right now.

Thanks for signing up! You can manage your newsletter subscriptions at any time.

SCOTUS’s conservative justices were so furious about the Pennsylvania decision that they attempted to shatter states’ authority to run their own elections. In October, Thomas—joined by Justices Samuel Alito, Neil Gorsuch, and Brett Kavanaugh—accused the Pennsylvania Supreme Court of infringing on the Legislature’s authority to set election law. They asserted that, under the U.S. Constitution, federal courts can override state courts’ interpretation of election codes based on their own sense of what the state legislature prefers. Yet these four justices never found a fifth vote: Amy Coney Barrett joined the court too late to weigh in, and Chief Justice John Roberts refused to go along with this hijacking of state election law. In the end, late-arriving ballots were counted, though they did not change the outcome of any federal race in Pennsylvania, including the presidential contest.

It makes sense, then, that SCOTUS refused to hear these cases on Monday. They are plainly moot, because the election is over, and there is no longer any live controversy to settle. Still,  three justices—Thomas, Alito, and Gorsuch—dissented from the court’s decision to turn away the Pennsylvania cases.

In his dissent, Thomas cast doubt on the legitimacy of the 2020 election by questioning the security of mail voting. “Voting by mail was traditionally limited to voters who had defined, well-documented reasons to be absent,” he wrote. The current trend toward more “permissive” mail voting, the justice warned, “vastly” increases “the risk of fraud.” Thomas drew heavily from a 2012 New York Times article focusing on Florida’s mail voting regime, which focused on a handful of fraudulent schemes involving mail ballots. The justice also pointed to a Republican operative’s criminal attempt to steal an election in North Carolina using mail ballots.

In reality, this kind of voter fraud is vanishingly rare, and its few perpetrators have been caught and prosecuted. An unprecedented number of states allowed everyone to vote by mail in 2020, and election security officials in Trump’s own administration deemed it “the most secure in American history.” This did not stop Thomas from condemning mail voting as a threat to “election confidence.” In a strikingly cynical move, the justice argued that laws curtailing mail voting may be justified without proof of fraud to prevent “the appearance of corruption.” He drew this standard from the campaign finance context, in which the court has upheld limits on political spending to bolster public confidence that lawmakers are not corrupt. According to Thomas, that doctrine also allows states to crack down on vote by mail even “where allegations” of fraud are “incorrect.” Why? To guard against the mere “appearance of corruption.” He added:

We are fortunate that many of the cases we have seen alleged only improper rule changes, not fraud. But that observation provides only small comfort. An election free from strong evidence of systemic fraud is not alone sufficient for election confidence. Also important is the assurance that fraud will not go undetected.

In other words, the fact that election officials uncovered virtually no fraud in 2020 does not prove that no fraud existed. It might just mean that fraud is difficult to detect. If this line sounds familiar, that’s because it is what Trump and his allies argued when seeking to undermine public confidence in the election results.

Somehow, this concern about fraud only applies to elections in Thomas’ world. The justice actually rejects the argument that campaign finance reforms may be justified to prevent the “appearance of corruption.” He is transplanting a doctrine that he does not support into a new context to shore up the legality of voter suppression laws. In the process, he is bolstering Trump’s paranoid attacks on mail voting, lending judicial credence to two foundational elements of the big lie: First, that vote by mail is inherently unsafe and insecure, and second, that fraudulent mail-voting schemes may be rampant yet “undetected,” vindicating Trump’s ridiculous claims that his voters are right to doubt the outcome of the presidential race.

Even Alito, joined by Gorsuch, was not willing to go as far as Thomas. In a separate dissent, he agreed that SCOTUS should take up these cases because they “present an important and recurring constitutional question.” We can only guess why Kavanaugh and Barrett declined to side with their fellow conservatives, especially since Kavanaugh has previously expressed Trump-like skepticism about mail voting. Perhaps neither justice wants to take on this controversial issue now that it’s essentially irrelevant. They may choose to wait until 2022 or 2024, when they can potentially alter the outcome of a race—and when Democrats may no longer control Congress, ruling out the possibility of court expansion.

Today, of course, Democrats do have the opportunity to expand the court, and those lawmakers who oppose judicial reform should look carefully at Monday’s opinions. Here we have the spectacle of three conservative justices betraying every known principle of conservative jurisprudence in an effort to prevent states from safeguarding suffrage in the future. These justices have spent years insisting that federal courts must not alter voting procedures in the run-up to an election; they then tried to alter Pennsylvania’s voting rules two weeks before Nov. 3 to nullify thousands of mail ballots (which skewed Democratic). Thomas, Alito, and Gorsuch now wish to exploit a moot case to award themselves immense power to override state courts and state constitutions to restrict mail voting and other reforms.

This approach is a radical overreach on a subject that was never seriously up for debate before the Trump era. We should not be comforted by the fact these justices are still in the minority: We know Kavanaugh agrees with them on the merits, so they only need Barrett’s vote to seize a majority, and her views on this subject are simply unknown. And even though they are in dissent, they are handing Republican-controlled state legislatures a rationale for new voter suppression laws by contributing to alleged mistrust in election integrity.

Democrats currently appear to lack the votes to expand the court. By declining to take action, the party is assenting to decades of rule by crass partisans like Thomas. Democrats may complain about the tsunami of voter suppression laws that Republicans are instituting in the wake of 2020, but they currently have an opportunity to end this wave of disenfranchisement by creating a majority of justices who believe in the right to vote. So far, they have passed it up. This inertia leaves the nation with a Supreme Court with at least four justices who are sympathetic to elements of Trump’s big lie. As long as they hold so much power on the bench, every federal election will remain at risk of subversion by judicial decree.