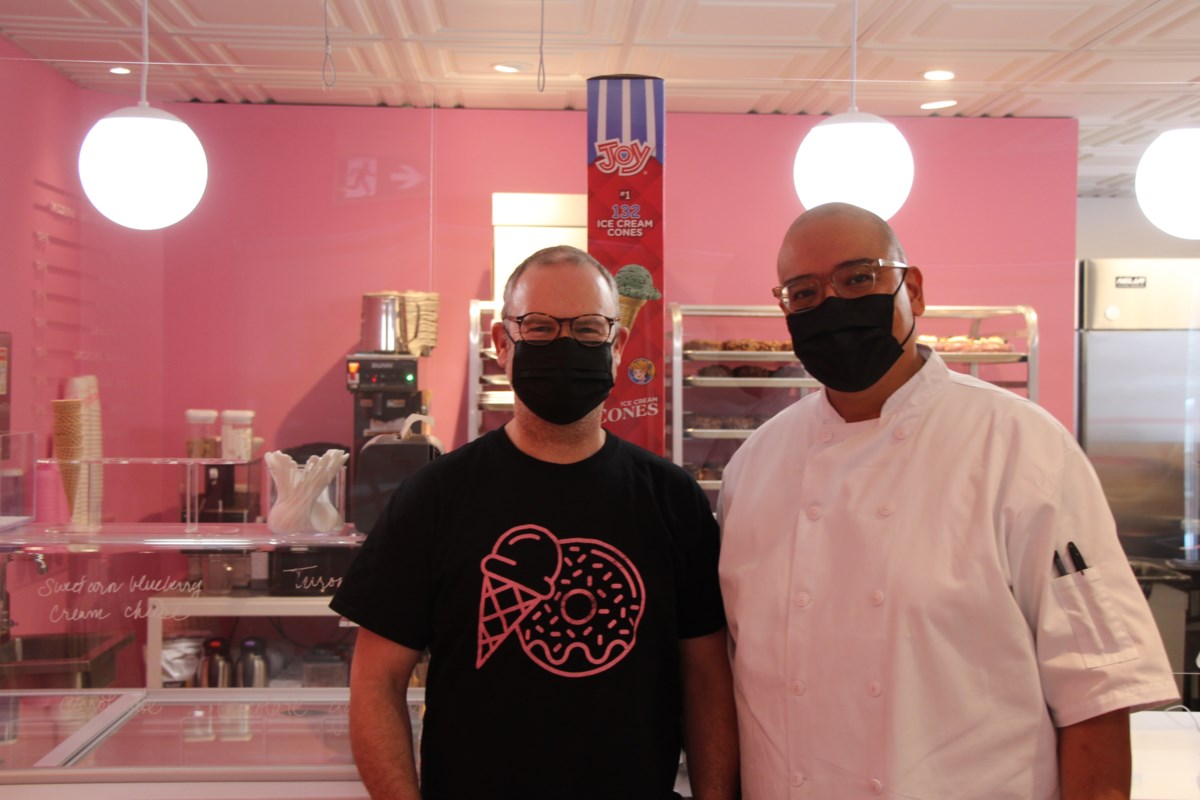 Sometimes you can’t beat cake when a craving hits, but you could fill the same craving with a beet cake doughnut – part of the menu at a new bakery in town.

Located at 10 Third St., Nicky’s Doughnuts & Ice Cream is the newest addition to the sweet side of Collingwood’s culinary scene. Its slogan is ‘Come on, get happy,’ and that’s exactly what co-owners Sam Holwell and Caesar Guinto want their customers to feel the minute they enter the shop.

“Who wouldn’t love fried dough with sugar on it,” laughed Guinto. “It’s the happiness factor.”

The doughnut and ice cream shop features a selection of unique flavoured doughnuts and hand-churned ice cream, all prepared fresh by Guinto each morning.

Doughnut flavours range from blueberry cheesecake and Ferrero Rocher to vegan apple fritter and even a beet cake doughnut, which was inspired by natural ingredients from The New Farm in Creemore.

Guinto said he would like to experiment with flavours and doughnuts from different cultures as well, such as Portuguese malasadas, Italian-inspired bombolones and cariocas from the Philippines.

“It’s all about making it fun,” said Guinto. “I like to introduce different things every once in a while as well.”

Guinto — the “Nicky” in Nicky’s Doughnuts & Ice Cream — has had a soft spot for doughnuts and ice cream since he was young. Nicky comes from Guinto’s middle name, Dominic, which he has been affectionately called by those close to him for most of his life.

Guinto and his family immigrated to Canada from the Philippines when he was a child, and his parents would get them doughnuts on the weekends as a special treat. The flavours were much simpler than the ones Guinto makes in his shop, but even back then, a Dutchie was always on the menu.

“It is still one of my favourite doughnuts,” Guinto admitted.

Guinto has been in the industry for almost 35 years, working as the executive chef at several establishments in Toronto, an executive pastry chef in Ireland, consulting for numerous restaurants and catering companies, and winning awards straight out of college. Guinto actually started his career as a pastry chef, but wanted to be able to do it all, so went on to receive training as a classical French and Italian chef as well.

Guinto and Holwell met while he was working as the executive chef for the Royal Ontario Museum (ROM) and hit it off instantly. They shared the same passion for esthetics, food, design and quality, and they have been partners both in business and in life ever since.

“Sam got me right away,” Guinto said. “So we decided to put both of our passions and talents together.”

The duo moved to Creemore and opened the Creemore Kitchen, a simple farm to table restaurant — Guinto as the chef and Holwell managing front of house operations. After five years of service, they decided close in 2018.

However, they had fallen in love with the area, and knew the culinary scene had potential. They began consulting for Black Bellows before the brewpub opened last year.

“It was very exciting to create a new hotspot in Collingwood,” said Guinto. “We saw what was missing here.”

Unfortunately, after only a few short months, COVID-19 changed the hospitality industry in an instant.

“When the pandemic hit it forced all of us to kind of sit back and relax,” said Guinto. “But it got Sam and I talking… Maybe if we want to work this hard, we should do it for ourselves again.”

So last March, in the midst of the pandemic, they started planning.

Guinto used to make doughnuts every Saturday at Creemore Kitchen, experimenting with fun flavours and attempting to turn his staff member’s favourite chocolate bars into doughnuts. And every weekend, they would sell out. He also used to hand make the ice cream with a small but trusty little ice cream machine.

“I’ve always had a passion for making doughnuts,” said Guinto. “I get excited and I am always happy making them.”

They thought of the name and started diving deeper into the concept, and the rest just followed.

They found a space to rent, renovated it, and officially opened the doors to Nicky’s Doughnuts and Ice & Cream on January 15. Guinto said they faced their fair share of fears and challenges along the way, especially trying to open a business with COVID-19 still such a concern, but they put their head down and hoped for the best.

“You put your mind to something, and all of a sudden you kind of have to let those fears subside and just… think positively,” said Guinto. “If you put your mind and heart into it, I feel that it will come back.”

And the response from the community has proved it. Every day before they open, a line forms outside the storefront, with people driving from as far as Owen Sound to get their hands on one of Nicky’s doughnuts.

“When we opened, it was unbelievable,” said Guinto. “It is so weird that in just ten months we went from an idea to being open and having lineups. It’s crazy. We’re pretty excited.”

And even in weather far below zero, people can be seen walking main street eating Nicky’s homemade ice cream on a waffle cone.

Guinto and Holwell have hired a few employees to help them part time, but for the most part, for now, they are doing it all themselves. Guinto starts his day around 1:00 a.m., producing almost 500 doughnuts from dough to frying and decorating. His favourite time of the day is when Holwell arrives around 6:00 a.m. and they discuss everything they need to discuss in the wee hours of the morning while Guinto decorates and Holwell sets up the shop.

Nicky’s also carries Anchored Coffee — a Canadian brand from Nova Scotia — as well as Pluck Tea and a selection of handcrafted spices from The Gorgeous Spice Co., both based in Toronto. They also offer hot chocolate, which is made in house.

“It’s a cool feeling, we are still in awe that it is happening but we are very grateful that it is,” said Guinto.

Nicky’s is open Thursday through Monday from 10 a.m. until they sell out.

For more information or to check out Nicky’s current doughnut selection, visit their website or Instagram page.