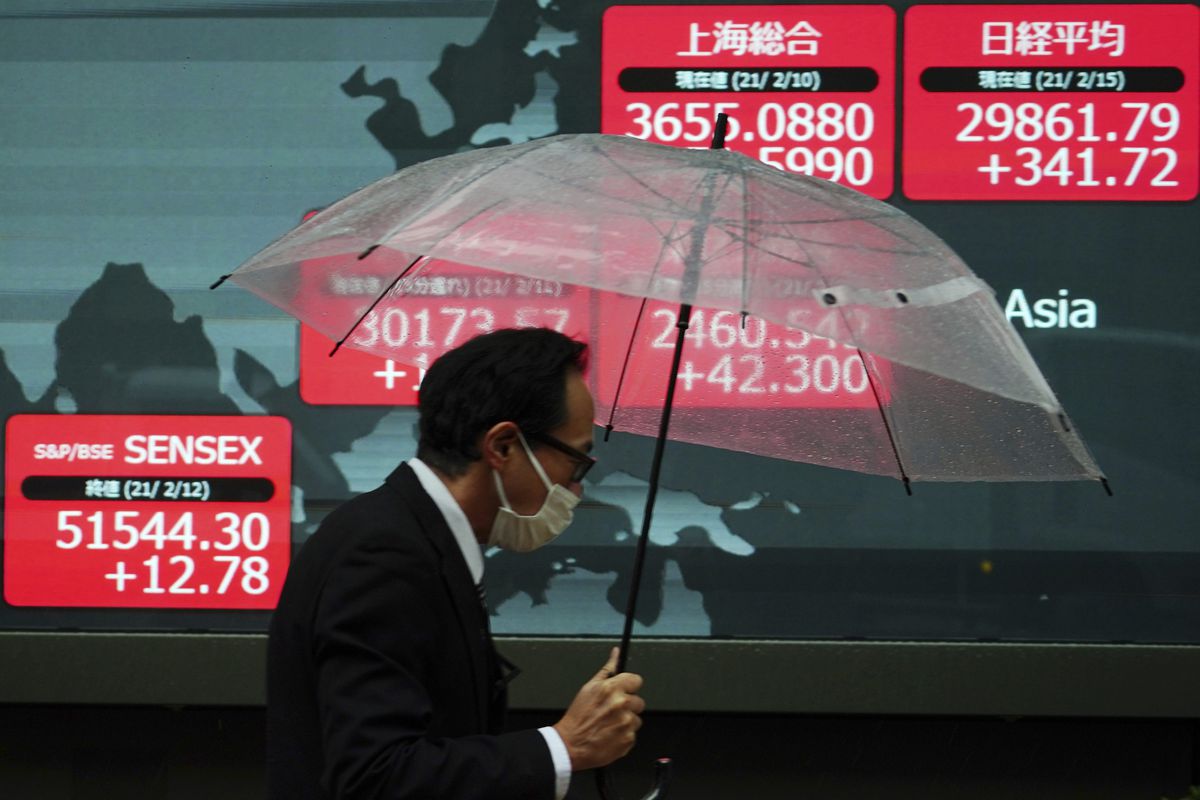 World shares started the week off with a rally, as Japan’s Nikkei 225 index closed above 30,000 for the first time since August 1990.

European markets opened higher Monday, following an advance in Asia. Shanghai and Hong Kong were closed for the Lunar New Year. U.S. markets will be closed Monday for Washington’s Birthday.

Optimism that Washington will come through on trillions of dollars of more aid for the economy and encouraging company earnings reports have helped stocks grind higher this month, along with hopes that the coronavirus vaccine rollout will set the stage for stronger economic growth in the second half of this year.

Democrats have decided to use a legislative process that does not require Republican support to pass the $1.9 trillion package proposed by President Joe Biden.

“Markets remain target fixated on the Biden stimulus and vaccine rollouts as the magic panacea for the world’s pandemic ills,” Jeffrey Halley of Oanda said in a commentary. That has translated into higher stock prices, with the world awash with stimulus funds seeking returns in a world where interest rates are around zero per cent, he said.

The strong buying in Tokyo was driven by news that the Japanese economy grew at a nearly 13% annual pace in the last quarter, and by strong corporate earnings reports. It was the second straight quarter of growth after a downturn drastically worsened by the impact of the pandemic.

The recovery should put the economy on track to recover to pre-pandemic levels by next year, helped by a recovery in demand for exports in the U.S. and other major trading partners, Marcel Thieliant of Capital Economies said in a report.

Japan recently re-imposed a state of emergency in Tokyo and several other prefectures to battle a resurgence of outbreaks. But sustained corporate investment and government spending are expected to help offset the impact on travel, restaurants and other sectors most affected.

“And while most economists expect a renewed contraction this quarter due to the second state of emergency, we think that output will be broadly flat in Q1 and rise more strongly this year than almost anyone anticipates,” Thieliant said.

Thailand’s SET benchmark index gained 0.9% after the government forecast the economy will expand by 2.5%-3.5% this year after contracting 6.1% in 2020 as the government restricted international travel and imposed other limits on activities to combat the pandemic.

On Friday, technology companies led a late-afternoon rally on Wall Street that capped a week of wobbly trading. with the major stock indexes hitting all-time highs.

A majority of U.S. companies have now reported their latest round of earnings and the results have been surprisingly good. Roughly 75% of companies in the S&P 500 have released results, showing overall growth of 2.8%, according to FactSet. That’s a sharp reversal from the 13% contraction analysts had forecast in late September.

In other trading U.S. benchmark crude oil picked up $1.10 to $60.57 per barrel in electronic trading on the New York Mercantile Exchange. It advanced $1.23 on Friday. Brent crude, the international standard, gained 83 cents to $63.26 per barrel.