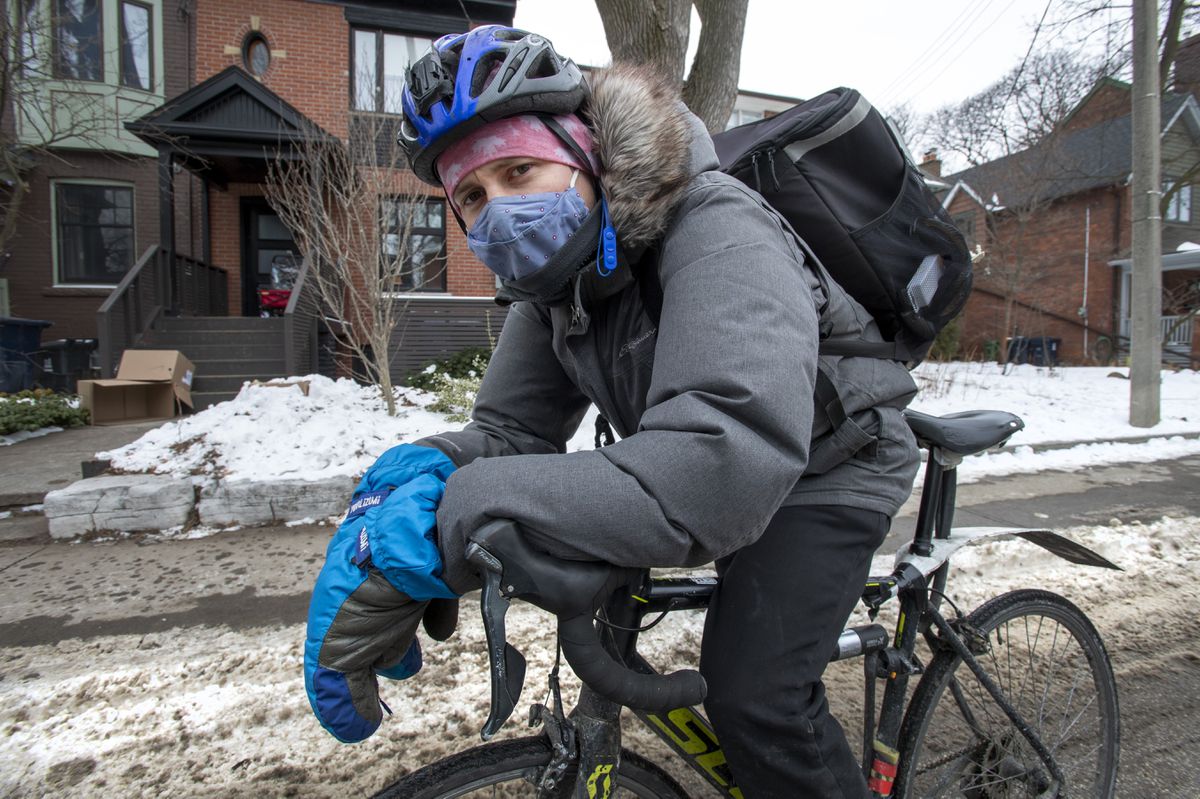 It’s enough to buy a loaf of bread or two litres of milk, but far from Ontario’s $14.25 minimum hourly wage.

And yet Uber Eats couriers working in the province say they’re earning as little as $3.99 per trip before tips, months after the food delivery service implemented a new pay policy in the middle of the COVID-19 pandemic.

“I’m making so little now that I’m thinking what is the point of even getting out there if I’m just going to make this much and it’s getting worse?” said Spencer Thompson, a Toronto man who has been dropping off meals for Uber Eats since 2016.

He spent hours tabulating his 2020 pay and discovered what so many of his fellow couriers have long suspected: their wages are shrinking at a time when people are relying on food delivery more than ever before.

Thompson, for example, made about $10 per trip – sometimes involving multiple stops – in January 2020, but by December, that had sank to as low as $3.99 per trip before tips.

The 60 per cent drop came in a year where Thompson worked in Toronto’s downtown core nearly every day of the week during the lunch and dinnertime windows, where pay tends to be higher. He averaged two or three trips an hour.

Couriers like Thompson, who are not formally employed by Uber but use its platform to pick up work, worry the situation could worsen and they’ll be left with few other job alternatives as COVID-19 continues to spread, unemployment remains high and companies increasingly see the benefits of the gig economy.

“We can’t let this go on and we can’t let this happen because if we do, then the future will be all work like this,” said Brice Sopher, an Uber Eats courier and organizer with the Gig Workers United union, who recalls making $9 or $10 per trip at the start of 2020, but now averages half that.

While couriers like Sopher and Thompson have long warned of the gig economy’s low pay, no job security and lack of coverage for injuries and sicknesses, their concerns became even more alarming after last June.

That was when Uber scrapped its earnings structure offering couriers fixed amounts based on pick ups, drop offs, distance and time and a series of bonuses for using the service during busy periods or in high-demand neighbourhoods. By taking advantages of bonuses and more rewarding orders, Thompson would land as much as $12.15 per trip before tips at the start of 2020.

The new system Uber brought in lowered base fares – totals couriers are offered to deliver an order that fluctuate based on time, distance, pickup and drop-offs – and started including a trip supplement to account for lengthy wait times at restaurants or distances couriers travelled to get there.

At first, the lowered base fares didn’t seem so bad because the company would offer high “boosts,” which multiplied courier earnings if they delivered food in areas seeing a surge in demand, said Sopher.

Under the new system, some workers were even making a little more than before, but slowly the boosts decreased, he recalled.

“They did it little by little, so that you wouldn’t notice,” he alleged. ‘But you would have this sneaking suspicion.”

The changes made tips more important than ever before, but customers are notoriously unreliable when it comes to tipping couriers, said Thompson. Some will be generous, while others avoid the extra handout altogether.

Uber, whose Eats service was first piloted in Toronto in 2015, said in an e-mail to The Canadian Press that it made changes to its wage structure, including reducing base fares, to better reflect each trip’s total time, effort and distance and include travel to the restaurant.

The changes also involved upfront pricing, which shows couriers the guaranteed net amount they’ll earn for a delivery before they accept the trip, alongside other details like the restaurant name and drop off locations. This allows drivers to decline trips that they feel are priced too low.

A $3.99 trip, the company said, is extremely short in duration and one priced at that amount with two stops is quite rare but can happen.

“Uber Eats is committed to transparency in pricing: before a delivery person accepts a trip, they are able to see the expected earnings for each trip. And, as always, 100% of tips go directly into their accounts,” the company said in an e-mail.

Sopher said he was disappointed with the changes because he and other couriers used to work 20 hours a week last spring and make $500, but now earns $300 over the same time span.

It’s not easy work either, he said. Being on a bike for long periods can be exhausting and visiting so many homes and restaurants puts couriers at more risk of picking up COVID-19.

“I feel enraged because it’s really profiteering during a pandemic,” he said.

“It’s what we’ve seen with a lot of major companies and with essential workers this pandemic really being told that they’re expendable workers. It’s pretty demoralizing.”

Thompson recently enrolled in a web development course in hopes of finding a more stable income source that will allow him to pursue his love of acting on the side.

He loves being out on his bike and is determined not to stop fighting for fair pay, but even he has a breaking point.

“I need to have something that can pay me much more per unit time and still give me time to do auditions and I realized this is not a sustainable paid job,” he said.

“I just need to survive.”