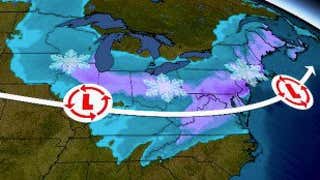 Winter Storm Orlena will pound parts of the Midwest, including Chicago, this weekend, then evolve into a nor’easter with heavy snow possible in Boston, New York, Philadelphia and Washington, D.C.

This latest in the recent winter storm parade already wrung out feet of snow in California’s Sierra and other parts of the West and now has a second chapter in store for tens of millions in the Midwest and Northeast through Tuesday.

This system has been named Winter Storm Orlena by The Weather Channel.

Winter storm watches, warnings and winter weather advisories are in effect from parts of the Northern Plains and southern Great Lakes to the southern Appalachians, Mid-Atlantic states and New England. The worst winter conditions are expected over the next 24 hours where warnings are in place, leading to reduced visibilities and slippery roads.

Let’s lay out the forecast timing, then the current snowfall forecasts, followed by some other potential impacts from the storm.

Orlena will arrive in the upper Midwest Saturday and will meet up with cold air to produce snow from Minnesota southeastward into Indiana and southwestern Ohio.

Snow will become heavy by late afternoon or evening from eastern Iowa, southern Wisconsin and northern Illinois into into northern Indiana and Ohio.

Gusty winds will also develop by Saturday night in these areas of heavier Midwest snow.

Saturday night, snow. possibly mixed with sleet or freezing rain will spread into the Appalachians and adjacent piedmont as far south as northern and western North Carolina.

Snow will continue Sunday in the southern Great Lakes, intensify in the Mid-Atlantic states, but taper off in the upper Midwest.

There remains some uncertainty regarding where the snow/ice/rain lines will set up Sunday east of the Appalachians, so some areas with snow in the forecast may see some sleet or freezing rain mix in, at times.

Sleet or freezing rain early may change to rain or simply end in parts of southern Virginia into northern and western North Carolina.

Sunday night, snow may creep north in the Mid-Atlantic states toward the New York City Tri-state. However, some lingering dry air may keep most of southern New England dry for the time being.

Snow will expand Sunday night in the Ohio Valley, extending as far south as Kentucky, Tennessee, and the Smoky Mountains, while coming to an end across the Upper Midwest.

This will likely be the peak day of the storm in the Northeast. But, there are still some lingering, key uncertainties in the forecast.

One significant uncertainty is the exact track of a secondary area of low pressure that will form near or off the Northeast coast Monday. What track the low takes will determine such details as how far inland snow falls, where the heaviest snow falls, and whether rain occurs at the coast.

There may also be a tongue of dry air several thousand feet above the ground known to meteorologists as the “dry slot”, that could take away at least a few hours of heavier precipitation wherever it tracks.

(MORE: Why Northeast Snowstorms Can Be Difficult to Forecast)

For now, snow, likely heavy, is expected Monday from southern New England to the Mid-Atlantic states. Lingering snow is expected in parts of the Ohio Valley and the Appalachians.

Monday night, that heavier snow is expected to spread farther north into New England, but may continue in parts of the Mid-Atlantic states.

Strong winds will also buffet the Northeast coast Monday and Monday night. We’ll discuss more of that in the impacts section below.

The best chance of snow continuing into Groundhog Day will be in New England, however some snow may linger a bit farther west in parts of upstate or central New York.

Some lingering snow showers and areas of lake-enhanced snow can’t be ruled out in the eastern Great Lakes and Appalachians, as well.

Snow could linger in these areas Tuesday night or even Wednesday.

At least 6 inches of snow is most probable in a swath from eastern Iowa, southern Wisconsin and northern Illinois into Indiana and Ohio.

This includes the Chicagoland and Milwaukee metro areas, where winds off Lake Michigan may enhance the snowfall.

A few locations in this Iowa to Ohio zone could measure up to a foot of snow.

Some blowing and drifting snow is possible as winds increase Saturday night into Sunday, particularly in rural areas and near the shores of the Great Lakes.

As mentioned earlier, how much snow falls and where it falls in the Northeast depends on the exact track of the low near or off the East Coast and how strong it becomes.

(MORE: 6 Things You Should Know About Your Snow Forecast)

A low track closer to the coast could mean more rain and less snow near the Northeast coast and possibly parts of the Interstate 95 Urban corridor, at least for a time.

Because of this potential for rain to mix in, there could be very large differences in snowfall over short distances across the following areas:

For now, heavy snowfall is possible in purple areas on the map above and most likely in the darkest purple contours. This heavy snow could include parts or all of the New York City, Philadelphia, Pittsburgh, Baltimore and Washington, D.C. metro areas.

Travel could become difficult in the Mid-Atlantic states by Sunday and in parts of the New York City Tri-state and New England by Monday.

The best chance of accumulating ice and sleet will be Sunday morning across the piedmont from southwestern Virginia into northern and western North Carolina.

A few locations may see enough ice accumulate on trees and powerlines to trigger at least some downed tree limbs and scattered power outages.

With sleet or ice either diminishing or transitioning to rain or drizzle later Sunday, this ice threat should diminish later in the day.

Snow won’t be the only impact.

Strong winds are likely to develop along the coast from the Delmarva Peninsula to coastal New England Monday and could last along the New England coast into Tuesday.

Strong north to northwest winds could develop over the interior Northeast, Appalachians and piedmont of Virginia and North Carolina Tuesday and linger in parts of the Northeast into Wednesday.

These winds could lead to power outages and possibly some tree damage, particularly if in combination with heavy accumulated snow.

For example, the high tides of most concern for coastal flooding along the New Jersey shore are late Monday morning, late Monday night, and again late Tuesday morning.

Check weather.com for updates to this forecast.

The Weather Company’s primary journalistic mission is to report on breaking weather news, the environment and the importance of science to our lives. This story does not necessarily represent the position of our parent company, IBM.