Market movers: Stocks seeing action on Thursday – and why 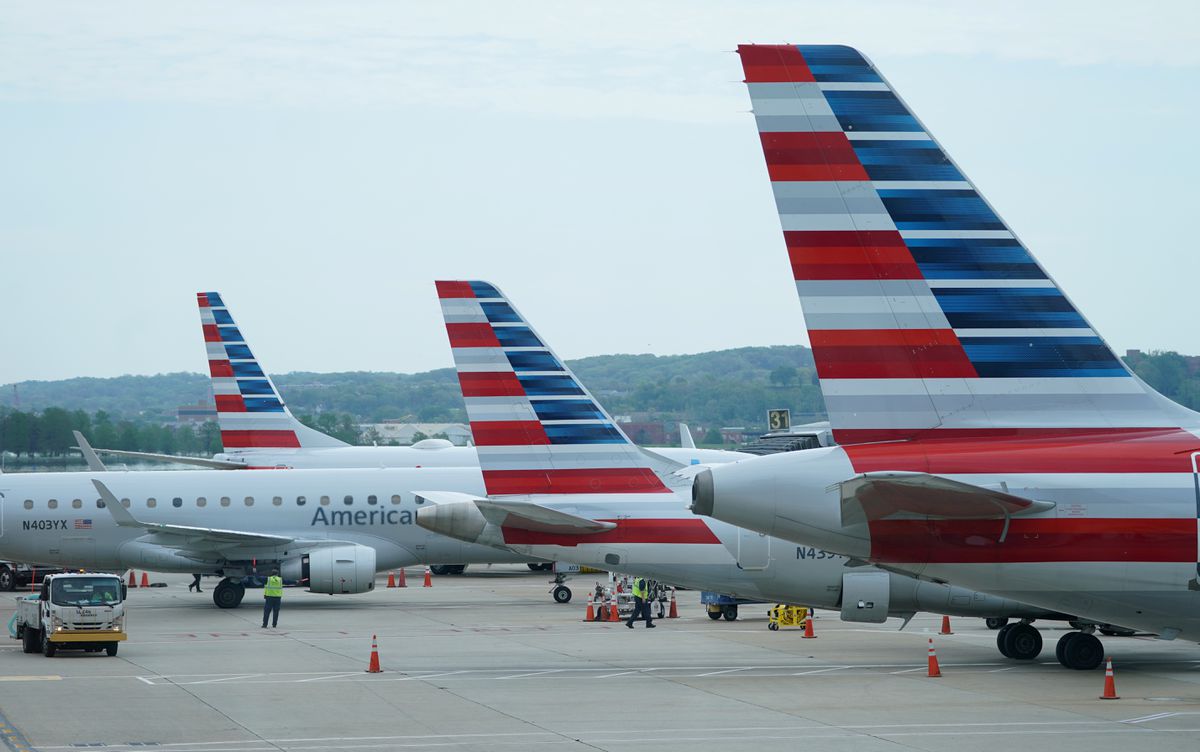 GameStop, the video game chain whose 1,700 per cent rally has been at the heart of the slugfest in the past week, retreated after initially adding another 37 per cent in early trading.

On Reddit thread WallStreetBets, where calls to buy stocks have helped drive the extraordinary moves, some of its more than 4 million members reported trading platform Robinhood was now preventing investors from buying new shares in GameStop and other of the companies.

Robinhood, one of the biggest of the easy access apps that has spurred the development of a huge online community of amateur traders, did not immediately respond to requests for comment.

American Airlines Group Inc posted a slimmer-than-expected quarterly loss on Thursday and joined rival Delta Air Lines in calling 2021 a year of recovery for an industry that has been ravaged by the coronavirus pandemic.

“As we look to the year ahead, 2021 will be a year of recovery. While we don’t know exactly when passenger demand will return, as vaccine distribution takes hold and travel restrictions are lifted, we will be ready,” American Airlines Chief Executive Doug Parker said.

See also: 4 things to know about the GameStop insanity

Canadian Pacific Railway Ltd. (CP-T) was higher in the wake of the post-market release of its quarterly results on Wednesday.

Before the bell, a pair of equity analyst raised their ratings for company’s stock.

“CP painted an optimistic outlook on volume growth for 2021 and introduced double-digit EPS growth guidance (vs consensus of 14 per cent),” Desjardins Securities’ Benoit Poirier said. “Throughout the pandemic, we have been impressed by the resiliency of CP’s volumes as well as its solid operational execution.”

Cenovus Energy Inc. (CVE-T) was up after it forecast higher production and spending for 2021 after its blockbuster purchase of rival Husky Energy, expecting to benefit from a rebound in fuel demand from a slump caused by the COVID-19 pandemic.

Cenovus said it expects to achieve cost savings of nearly $1-billion this year from the merger through steps including cutting 20 per cent to 25 per cent of the combined company’s workforce.

Methanex Corp. (MX-T) was up in the wake of Wednesday’s release of mixed fourth-quarter results.

The Vancouver-based methanol producer reported adjusted EBITDA of US$136.2-million, up 239 per cent from the previous quarter but below the Street’s expectation of US$153-million. Revenue rose 39.6 per cent to US$811.3-million, exceeding the consensus projection of US$769-million.

In a research note, Scotia Capital analyst Ben Isaacson said: “We expect the stock to underperform in the near term, as the outlook for 2021 methanol production is weaker than expected, driven by upstream gas production declines in New Zealand, Trinidad, and Chile. Additionally, the Q4 discount rate was higher (slightly worse) than we thought. The silver lining, however, is that the fly-up in methanol prices may now last longer given Methanex will likely produce about 1M mt less in ’21 than it did in ’19.”

Payments processor Mastercard Inc. (MA-N) increased in the wake of beating Wall Street estimates for fourth-quarter profit, as growth in overall transactions partially offset the impact of a decline in cross-border volumes.

Excluding items, Mastercard reported net income of US$1.6-billion for the quarter ended Dec. 31, or US$1.64 per share, compared with US$2-billion a year earlier, or US$1.96 a share.

Analysts on average were expecting a profit of US$1.51 per share, according to the IBES estimate from Refinitiv.

A slump in travel demand and discretionary spending has taken a toll on the bottom line of credit card companies and payment processors.

Still, Mastercard managed to drive growth in overall volumes during the quarter. Gross dollar volume growth rose 1 per cent to US$1.7-trillion from a year earlier.

The world’s biggest social media company said in its outlook that it expected to face “significant ad targeting headwinds in 2021.” Facebook forecast that Apple’s update of its iPhone operating system to iOS 14 could start biting into revenues as early as the end of the first quarter.

The fourth-quarter results validated the company’s focus on making it easier for retailers to sell to Facebook users, who frequently were stuck at home last year during the COVID-19 pandemic.

The coronavirus surge in e-commerce buoyed revenue growth for Facebook, which has been cooling steadily as its business matures.

McDonald’s Corp. (MCD-N) was flat after it missed Wall Street estimates for quarterly profit and revenue on Thursday as a second round of lockdowns in parts of Europe hurt its business and countered the hamburger chain’s sales growth in the U.S. market.

McDonald’s said the restrictions were impacting markets abroad, particularly those with fewer drive-thru locations, and that it was expecting some of them to remain as long as the pandemic’s vice-like grip on the world continued.

Fourth-quarter comparable sales for the restaurant chain’s international operated markets segment fell 7.4 per cent in the fourth quarter, largely due to weakness in France, Germany, Italy and Spain, where the health crisis has been more intense.

Analysts had forecast a drop of 5.03 per cent for the segment, according to IBES data from Refinitiv.

Comparable sales in the United States, however, rose 5.5 per cent, an improvement over the prior quarter and better than the estimate of 5.15-per-cent rise, as the company leaned on its drive-thrus and celebrity collaboration, including the launch of the crowd-favorite Travis Scott Meal, to drive its business.

Excluding one-time items, the company earned US$1.70 per share, missing the average analyst estimate by 8 US cents.

Rogers Communications Inc. (RCI.B-T) was lower after it saw its fourth quarter profits and revenue decline from a year ago, even as it added new wireless and internet subscribers.

Rogers had $3.68-billion in revenue for the three-month period ended Dec. 31, down 7 per cent from a year ago when it reported $3.95-billion of revenue. The company said the decline was driven largely by an 8-per-cent drop in wireless service revenues, as the pandemic halted travel and resulted in a steep drop in roaming charges. Overage revenue also declined, as customers continued to switch to unlimited data packages which throttle users’ speeds when they hit their data limits instead of racking up charges.

The Toronto-based telecom saw its quarterly profit decline by 4 per cent to $449-million, compared to $468-million during the same period last year. The earnings amounted to 89 cents per share, down from 92 cents per share a year ago.

Analysts had been expecting $468-million in profits and $3.77-billion in revenue, according to S&P Capital IQ.

The reported adjusted EBITDA and revenue of $17.4-million and $120.3-million, respectively, exceeding the Street’s projections of $16.6-million and $115.6-billion.

Apple Inc. (AAPL-Q) was down after it reported holiday quarter sales and profits that beat Wall Street expectations, as new 5G iPhones helped push handset revenue to a new record and sparked a 57-per-cent rise in China sales.

Apple shipped its iPhone 12 lineup several weeks later than usual, but an expanded number of models and new look tapped pent up demand for upgrades, especially in China. The company also posted strong sales of its Mac laptops and iPads in the quarter, driven by consumers working, learning and playing from home during the pandemic.

Apple’s revenue for the quarter ended Dec. 26 rose 21 per cent to US$111.44-billion. Earnings per share rose to US$1.68 from US$1.25, beating Wall Street targets, according to IBES data from Refinitiv. Sales of iPhones were US$65.60-billion and beat a record set three years ago.

Chief Financial Officer Luca Maestri told investors that revenue growth was likely to accelerate on a year-over-year basis in the current fiscal second quarter and that gross margins were likely to be similar to the fiscal first quarter’s rate of 39.7 per cent. He also said the company’s services segment revenue faced a tough comparison to the year before, when the pandemic lifted sales, and that year-over-year growth in the company’s wearables segment would slow.

The disappointing results come after shares of the electric carmaker led by CEO Elon Musk surged nearly 700 per cent over the past 12 months, a valuation rooted in expectations that Tesla will quickly and profitably expand.

Investors had hoped for a significant increase over the company’s 2020 delivery goal of half a million vehicles, but Tesla provided only a vague outlook and did not state a concrete delivery goal.

“Over a multi-year horizon, we expect to achieve 50-per-cent average annual growth in vehicle deliveries. In some years we may grow faster, which we expect to be the case in 2021,” Tesla said in a statement.

Raymond James analyst David Nowak said: “We were concerned that the level of disclosure during the update could fall short of market expectations. In our view, this is precisely what occurred during the update resulting in ZYME shares trading off 32 per cent after hours. While the data disclosed renders cross therapeutic comparisons nearly impossible at this point, we would highlight that ZW49 safety and tolerability to date is class-leading with no ILD or hematologic toxicities and no Grade 4 or 5 AEs. Furthermore, the drug has shown activity across a range of cancers with varying HER2 expression, doses and dosing regimens.”