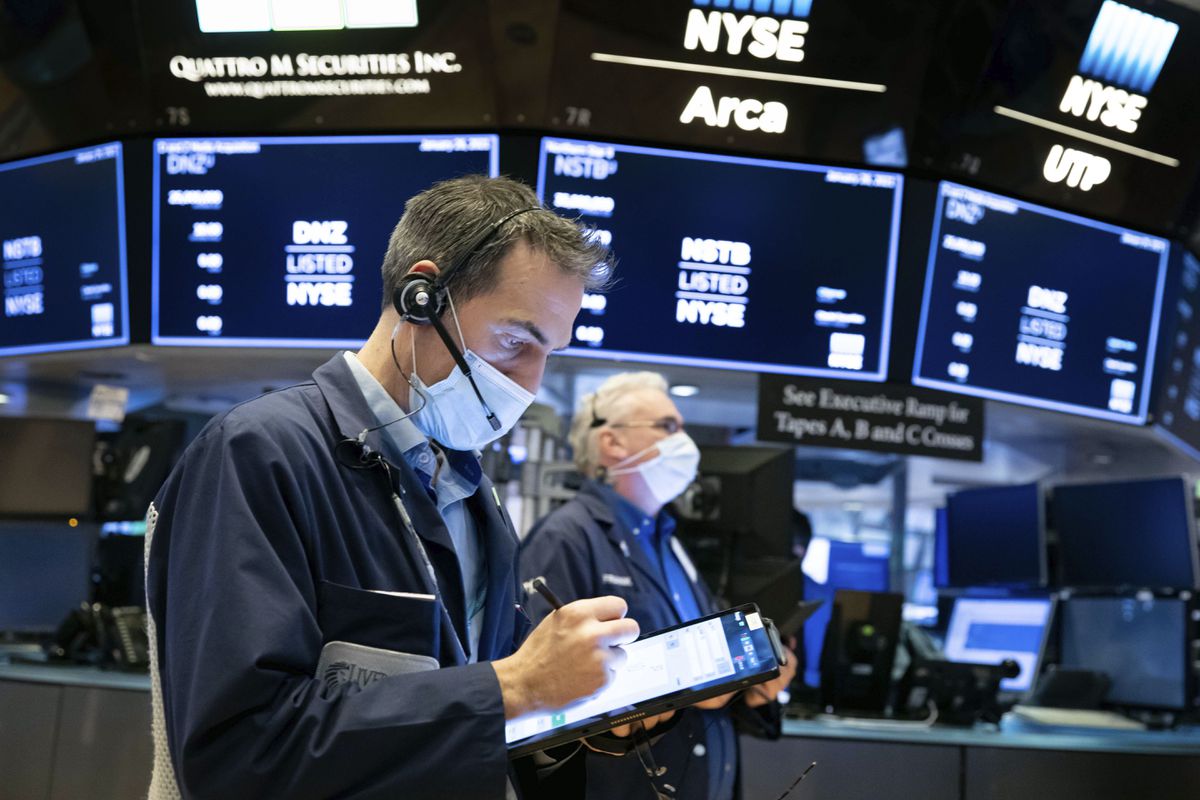 Wall Street futures were mixed early Wednesday as investors await the latest policy decision from the Federal Reserve and turn their focus to earnings from some of the biggest tech names. Major European markets were choppy after a lower start. TSX futures were modestly positive, helped by higher crude prices.

Nasdaq futures were firmly positive, signalling a higher start for the tech-heavy index. Dow and S&P futures, however, were more tentative in early going. The S&P and Nasdaq both closed down slightly on Tuesday, pulling back from recent record highs. The S&P/TSX Composite Index finished the session off 0.71 per cent, weighed down by tech and energy shares.

Microsoft Inc. shares were up more than 3 per cent in premarket trading after its Azure cloud computing services grew more than 50 per cent in the second quarter. The software giant’s total revenue rose to US$43.08-billion in the second quarter ended Dec. 31, from US$36.91-billion a year earlier, beating analysts’ estimates of US$40.18-billion, according to IBES data from Refinitiv.

The results, released after Tuesday’s close, set the stage for another round of tech results on Wednesday, with Apple, Facebook and Tesla all reporting after the end of trading.

“Microsoft results didn’t only surprise investors to the upside, but got them to dream for more,” Ipek Ozkardeskaya, Senior Analyst at Swissquote Bank.

“But if the U.S. big tech continues its extended honeymoon, other layers of the economy don’t necessarily tell the same story,” she said. “The pandemic continues taking a toll on businesses in the U.S. and worldwide – keeping most of small and medium sized companies craving for more fiscal and monetary stimulus.”

The day’s other big event will be the Fed’s afternoon policy decision. No move is expected by the powerful U.S. central bank but investors will watch an afternoon news conference by Fed chair Jerome Powell for signals about the economic outlook and signs of a future slowdown in the Fed’s asset-buying program.

“There will certainly be no hint of a policy tightening, or tapering in the foreseeable future, given that the health crisis has not been losing speed with the mutation of the virus and delay in vaccine distributions across the globe,” Ms. Ozkardeskaya said.

Wall Street will also get results from Boeing ahead of the start of trading.

In this country, Canadian National Railway hiked its dividend 7 per cent and reinstated its guidance for 2021 as it saw improved demand for freight in the final months of last year.

Montreal-based CN said its net income rose 17 per cent in the fourth quarter to $1.02-billion, or $1.43 per share, helped largely by shipments of grain. The results were released after Tuesday’s close.

Crude prices rose, with Brent topping US$56 a barrel, after new industry figures showed a surprise drop in U.S. inventories.

The American Petroleum Institute said late Tuesday that weekly U.S. crude stocks fell by 5.3 million barrels. Analysts had been looking for an increase.

“In the bigger picture, oil continues consolidating at the top of the range of its rally from the November lows,” OANDA senior analyst Jeffrey Halley said.

“The Saudi Arabian cuts, OPEC+ compliance above 85 per cent and an insatiable demand from Asia means that oil has seen its cyclical lows for 2021.”

Crude’s advance continues to be capped by concerns about rising coronavirus infections in countries including Britain and the United States and the resurgence of the virus in China.

However, official Chinese data showed 75 new confirmed cases of COVID-19 on Wednesday, the lowest daily rise since Jan. 11, easing concern of a sharp drop in travel over the Lunar New Year when hundreds of millions typically travel, according to a Reuters report.

In other commodities, gold traded in a narrow range on Wednesday as market participants awaited the Fed’s policy decision.

The Canadian dollar was down slightly in early going as its U.S. counterpart edged higher on global markets with currencies moving in a tight range ahead of the Fed policy decision.

There were no major Canadian economic releases on Wednesday’s calendar.

“FX majors have traded extremely tight ranges overnight, with no lead from asset markets and all eyes are on the Fed,” RBC chief currency strategist Adam Cole said.

“Year-to-date, all G10 currencies are within 1 per cent of where they started the year and we see no evidence of the January overshooting that we have observed in each of the last five years, so there is little value in looking for reversals this year.”

On global markets, the U.S. dollar index, which weighs the greenback against a group of world currencies, edged up 0.1 per cent to 90.284 early Wednesday, following a 0.2-per-cent decline during the previous session. The index has been consolidating since hitting a three-year low at the start of the month, according to figures from Reuters.

GameStop shares surged another 60 per cent on Wednesday in pre-market trading, boosted by increased interest among amateur investors who have lifted the share price by 700 per cent over the past two weeks. But some hedge funds have refused to budge from their bearish bets, with FIS’ Analytics data showing investors had piled on US$2.2-billion in bearish bets on the U.S. video game retailer – 20 per cent of its market capitalization, In the meantime, Reddit’s Wallstreetbets stock trading discussion group were backing the company, buying shares and call options on the stock.

With Reuters and The Canadian Press