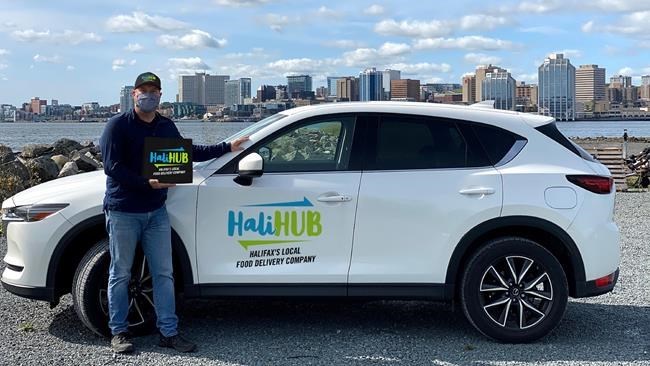 HALIFAX — Delivery was never on the menu at restaurateur Craig Flinn’s neighbourhood eateries.

Even when spring lockdowns shuttered restaurants and forced diners to stay home, the chef and proprietor of Two Doors Down offered only curbside pickup, rejecting the sky-high fees charged by food-service delivery companies.

“I flat-out refused,” says Flinn, who has two locations in Halifax and Dartmouth. “When you don’t have dine-in and then all your business would be reduced by 25 or 30 per cent, it’s completely unsustainable.”

With indoor dining banned or significantly reduced in many parts of the country, delivery is one of the few remaining revenue streams for restaurants. But restaurateurs say exorbitant fees of up to 30 per cent charged by online food ordering and delivery apps can make it unprofitable to stay open.

A new venture, however, means customers craving smoked pork chops with fried mac and cheese from Two Doors Down can order through a local startup that offers an alternative to bigger players like Uber Eats, SkipTheDishes and DoorDash.

HaliHub Food Delivery charges a flat-rate commission of nine per cent, which is among the lowest in the food delivery industry.

“Those fees put a lot of restaurants in a position where they’re not profitable,” says MacDonald, a former food service executive.

“They’re actually losing on every meal they send out. By offering a lower rate, we’re hoping to give restaurants a chance to survive these uncertain times.”

Despite growing frustration with high delivery fees in the restaurant industry, many continue to see it as a “necessary evil,” says Luc Erjavec, vice-president Atlantic Canada with Restaurants Canada.

“Customers want it and they’ve got slick marketing, but restaurants aren’t making any money with these third-party delivery apps,” he says. “It’s really a love-hate relationship.”

But “fear of missing out” and the lack of other options forces restaurants to use the delivery services, Erjavec says.

Two provinces have already taken aim at the commissions charged by companies like SkipTheDishes and Uber Eats.

The Ontario government ushered in a new provincial law last month capping transaction rates at 20 per cent — with a commission of no more than 15 per cent on food delivery services and an additional five per cent service processing fee. The cap, which came into effect in late December, applies in areas where indoor dining is prohibited.

The British Columbia government also brought in a temporary 15 per cent cap on food-service delivery fees, also with an added five per cent fee for processing an order.

Back in Halifax, MacDonald says his startup offers more than a cheaper rate.

“Our concept is built on three things,” he says. “We wanted to charge lower rates, keep the money local and give control back to restaurants.”

With the bigger food delivery apps, if a customer complains about a meal, they are often automatically refunded — leaving the restaurant to cover the entire cost without having a chance to address the problem, MacDonald says.

But with HaliHub, the restaurant deals directly with the customer to resolve the issue, he says.

“The restaurant has the control to make whatever decision that they want,” MacDonald says. “They don’t just automatically lose the whole thing, they have a chance to make it right.”

While the HaliHub business model hinges on personal service — MacDonald says any one of the 30 or so restaurant owners that now use the app can pick up the phone and call him directly — he says there’s also a possibility of growing within Atlantic Canada.

“Once all the technology is fully in place and our apps are up and running, there’s the possibility of expanding into different markets,” he says. “We could have a Moncton-Hub or St. John’s-Hub or Charlottetown-Hub.”

Back at Two Doors Down, restaurateur Flinn says HaliHub is off to a strong start.

“I remember the first Friday that we offered it, especially at our Halifax location, we got a significant number of orders,” he says. “It was enough that even HaliHub was surprised.”

“Even before the pandemic, people wanted more convenience and delivery was growing,” he says. “The lockdowns just accelerated that trend, especially for sit-down restaurants.”

While restaurants want to accommodate the demand for more delivery options, “they just don’t want to pay a 30 per cent delivery cost,” Stewart says. “It just wipes out their profit.”

This report by The Canadian Press was first published Jan. 25, 2021.