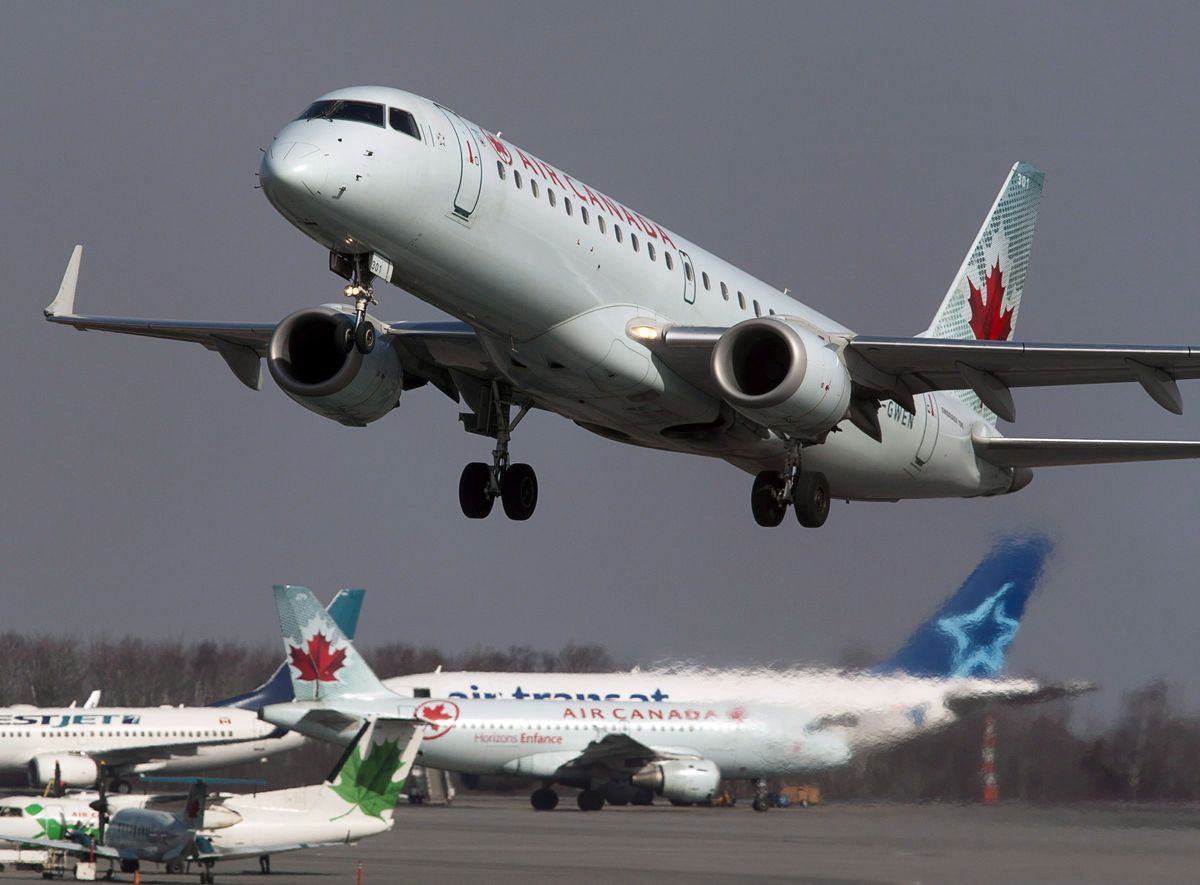 “In the interim, the Company continues to burn an estimated $14-million to $16-million per day in cash during the quarter,” he said. “With that said, we continue to see the Company making it to the other side of the pandemic and leveraging a more efficient cost structure and fleet in a recovery.”

Mr. Murray thinks a stronger Canadian dollar is helping to mitigate the impact of dilution stemming from the company’s recent equity raise of 38 million shares and a sale and leaseback transaction for $485-million in October, which he projects to brings proforma liquidity to $9.5-billion.

“The fall in the C$/US$ exchange rate should also prove beneficial for equity holders as most debt is US$ denominated as are a significant portion of operating costs,” he said. “We are forecasting a gain of $500-million in Q4/20 from the mark to market of debt due to the changes in FX rates, with the impact offsetting the dilution from the recent raises. We note that these impacts are sometimes misunderstood by the market, we believe creating the opportunity for some surprise.”

Ahead of the Feb. 12 release of its earnings, Mr. Murray lowered his quarterly revenue and EBITDA projections to $763-million and a loss of $379-million, respectively, citing traffic, fuel and the equity raise.

“We have also lowered expectations for H1/21 traffic based on data to date,” he said. “At ATB’s 9th Annual Institutional Investor Conference, management noted that as a result of recently introduced travel restrictions in Canada, it is exploring reducing capacity further in Q1 and press released that expectation for Q1/21 capacity of 20 per cent of Q1/20. We continue to expect domestic traffic to lead the Firm’s rebound in a recovery, and expect the Company to continue relying on cargo revenues to reduce cash burn in the meantime, with the Firm reporting a burn rate of $9-million per day in Q3.”

Keeping an “outperform” rating for Air Canada shares, he raised his target to $28 from $27.50 based on his higher 2022 earnings expectations. The average on the Street is $27.47.

In a research report released Friday, he initiated coverage of the Edmonton-based power producer with a “buy” recommendation, calling it an “ESG/sustainable winning story”

“There is solid current/growing renewables exposure, with the remainder of the company’s portfolio an ESG ‘diamond in the rough’ which offers significant re-rate potential through emissions reduction/elimination—first stop: removing coal by 2023,” said Mr. Cabel. “An eventual hydrogen or carbon capture solution, potentially eliminating emissions from natural gas, should drive further significant upside.”

He sees Capital Power possessing the ability to incorporate “real” change within its portfolio.

“We believe investors looking for an ESG/renewables play that does not trade at a historically high valuation multiple could find CPX compelling,” he said. “The company recently developed a strategy to remove coal by 2023, turning two facilities into the most efficient gas assets in Canada that will generate carbon credits—removing significant CO2 emissions. CPX is committed to innovation and should have hydrogen-ready and carbon-capture-enabled gas facilities by 2024. Eliminating carbon from natural gas facilities is only a matter of time, and this could significantly increase the value of strategically located assets, in our view.”

“With a clear path for coming off coal and 30-per-cent renewables (and a pipeline to grow to 35 per cent), trading at 7.5 times EV/EBITDA does not make sense,” he said. “We believe that as ESG-investing techniques become ‘smarter’, with experience investors will identify stories such as this which are making direct positive change and will reward CPX for its portfolio transition.

“While awaiting ESG recognition, investors can expect a 7 per cent plus AFFO [adjusted funds from operations] per share CAGR [compound annual growth rate] until 2024, outsized yield (currently 5.6 per cent) and a low 45-per-cent payout ratio.”

“CPX offers investors deep value in light of our view that it is mispriced in the market; it offers exposure to the hot renewables market but also provides a unique re-rate angle as it works to remove coal (by 2023),” he said. “Longer-term, we believe another re-rate could be possible as CPX cleans up its strategically important natural gas assets through a hydrogen/carbon capture, utilization and storage solution.”

“This announcement, in our view, is quite material considering the backdrop of $10.3-million in total revenues projected for F2020 (with Q1-Q3 already reported) and $14.9-million in F202,” he said. “Recall, our thesis calls for ongoing triple-digit revenue growth in data revenues. We understand from management that one-third of the aforesaid $4-million relates to data revenues, essentially representing more than 50 per cent of the F2020 estimate base. The other two-thirds relate to general ad-tech revenue under EQ’s DSP operations.

“While we are maintaining our F2021 estimates at this point, ahead of Q4/20 reporting, this does give us increased confidence around achieving our forecasts quite comfortably.”

With that view, Mr. Galappatthige raised his rating for the Toronto-based software firm to “buy” from “speculative buy.”

“In our view, what makes EQ’s investment thesis attractive is its data solutions business, which we believe can grow exponentially over the next several years,” he said. “EQ’s value proposition primarily involves helping its clients better understand and define its own customers, through unique datasets and analytics. The product is offered both on a self-serve (essentially SaaS) and managed-services basis, with several key blue-chip clientele already secured. The quality of EQ’s clientele, in our mind, which includes Bell Media, Loblaws, Walmart, TD Bank, and Jaguar dealerships, is the key piece of evidence for investors in terms of the credibility of its offering.”

Mr. Galappatthige raised his target for EQ shares to $2.50 from $2, which is the current average on the Street.

“[Thursday’s] press release, together with recent announcements relating to new engagements in the publishing and education sectors, further corroborates our thesis and reinforces our confidence around the traction being achieved by EQ, particularly on the data services front. Factoring in this and the sharp upswing in the peer group, we take our target to $2.50 per share from $2.00,” he said.

On Thursday before the bell, the Toronto-based company announced it expects gross profit of $8.3-$8.7-million and adjusted earnings before interest, taxes, depreciation and amortization of $0.2-$0.6-million. Both exceeded Mr. Byrne’s projections ($7.7-million and a loss of $0.4-million).

With its full-year guidance also topping his estimates, he raised his target for its shares to US$18 from US$14, which is the current consensus. He kept a “buy” recommendation.

“Management continues to lay the foundation for a strong rebound with new partners and expanded relationships with existing partners,” the analyst said.

* JP Morgan analyst Richard Choe upgraded Rogers Communications Inc. (RCI.B-T) to “overweight” from “underweight” with a $72 target, up from $63. The average on the Street is $67.92.

* Piper Sandler analyst David Amsellem downgraded Bausch Health Companies Inc. (BHC-N, BHC-T) to “neutral” from “overweight” with a US$30 target, up from US$25, exceeding the US$28.50 average.

* JP Morgan analyst Ryan Brinkman increased his target for Magna International Inc. (MGA-N, MG-T) to $90 from US$86 with an “overweight” rating. The average is US$76.97.

* RBC Dominion Securities analyst Irene Nattel cut her target for Loblaw Companies Ltd. (L-T) to $95 from $106 with an “outperform” rating. The average is $77.73.

* CIBC World Markets analyst Anita Soni lowered his target for B2Gold Corp. (BTG-N, BTO-T) to US$8 from US$8.50, while National Bank Financial’s Don DeMarco cut his target to $11 from $12 with an “outperform” recommendaition. The average is $11.78.