Cladding crisis: ‘Delays could bankrupt us’

The government’s fund to pay for the removal of dangerous cladding is woefully inadequate, oversubscribed and taking too long to make buildings safe, campaigners say.

More than three and a half years since the Grenfell Tower fire which killed 72 people, an estimated 700,000 people are still living in high-rise blocks with flammable cladding.

The £1.6bn Building Safety Programme was set up in 2019. Concerns have emerged about the contract that the Ministry of Housing, Communities and Local Government requires applicants to the fund, usually managing agents or building owners, to sign.

A clause in the contract, seen by the BBC, indicates applicants will be financially liable for any repair work not covered by the fund.

The BBC has learnt that some managing agents are refusing to sign the document, further delaying the repair work, and have written to the government asking ministers to clarify the position.

Christian Hansen, a solicitor at Bindmans LLP specialising in housing law and fire safety claims, said the contract showed that “there’s going to be a significant shortfall between the costs of the [repair] works that are required and the funding provided under the scheme”.

“Someone is going to need to pick up the bill and pay the difference. This contract makes clear it’s going to be the leaseholders and for many, this could be tens of thousands of pounds, potentially ruinous costs,” he warned.

Mr Hansen said that leaseholders wanted the focus of government action “to be on the manufacturers of the defective materials and construction companies who built these buildings”.

“At the moment, they are the ones profiting from putting people’s lives at risk.” 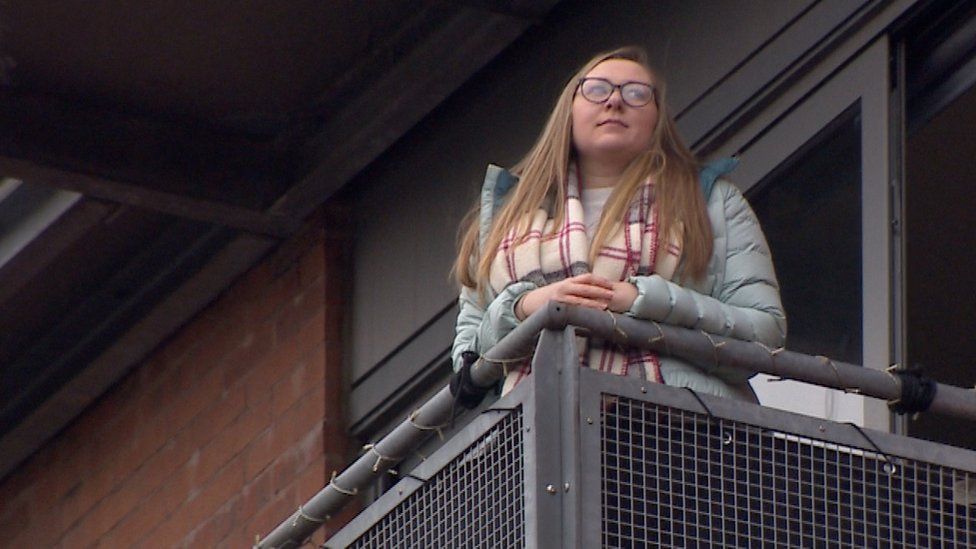 Inspections of the 14-storey building in the wake of the Grenfell Tower tragedy revealed it had the same type of flammable ACM cladding and other safety faults.

Work to remove the cladding started last month, but Ms Cottenden, who is a frontline NHS health worker, is frustrated at what she describes as a lack of progress.

“The pace of work is extremely slow. So far, they’ve put scaffolding up and removed three panels. They have told us it’s going to take between 12 and 24 months just to take the cladding off,” she said.

“It is absolutely terrifying knowing that you are stuck here. With lockdown, they are saying not to go out, but you are in a building where all you want to do is not be in it. You can’t leave. You can’t sell. My flat isn’t worth anything until it is made safe.”

While the government’s Building Safety Fund is paying for the Grenfell-style cladding to be removed, the building has other fire safety faults, including missing fire breaks, that aren’t covered by the scheme.

“We can’t pay it and we shouldn’t have to pay it. It is not our fault. We could all go bankrupt because of this,” Ms Cottenden said.

A spokesperson for Rendall & Rittner, the company which manages Metis Tower, said government funding to remove ACM cladding had been approved totalling £6.3m.

However, an application to the same fund to pay for the removal of other types of unsafe cladding was rejected and the company has appealed against that decision.

The company added: “We understand and sympathise with residents and owners about the uncertainty that this situation is causing and will do all we can to assist.”

What started as a cladding scandal has now become a much wider building safety crisis, exposing decades of regulatory failure.

Safety inspections have revealed that many buildings have other serious faults, including missing fire breaks, flammable balconies and defective insulation. None of that is covered by the government’s Building Safety Fund.

“In the longer term, the draining of reserve funds will also mean that in the years to come, any major works that were being saved up for, such as a new roof or lift repairs, will have to be funded anew by the leaseholders,” he added.

A spokesperson for the Ministry of Housing, Communities and Local Government said that despite the pandemic, significant progress had been made to remove dangerous cladding, but “building safety remains the responsibility of the building owner and we expect them to ensure any necessary work is carried out safely and effectively”.

“All applicants to the Building Safety Fund are told the amount of funding they have been awarded before being asked to sign contracts – this is clearly explained in the guidance,” the spokesperson added.