Lisa Montgomery – the only female inmate on federal death row in the US – has been executed for murder.

She received a lethal injection at a prison in Terre Haute, Indiana, after a last-minute stay of execution was lifted by the US Supreme Court.

The case attracted attention because her lawyers argued she was mentally ill and suffered serious abuse as a child.

The 52-year-old strangled a pregnant woman before cutting out and kidnapping her baby in Missouri in 2004.

Montgomery is the first female federal inmate to be put to death by the US government in 67 years.

According to witnesses, a woman standing next to Montgomery during the execution process, removed the inmate’s face mask and asked her if she had any last words. Montgomery responded “no”, and said nothing else.

She was pronounced dead at 01:31 (06:31 GMT). Montgomery’s lawyer, Kelley Henry, said that everyone who had participated in the execution “should feel shame”.

“The government stopped at nothing in its zeal to kill this damaged and delusional woman,” she said in a statement. “Lisa Montgomery’s execution was far from justice.” 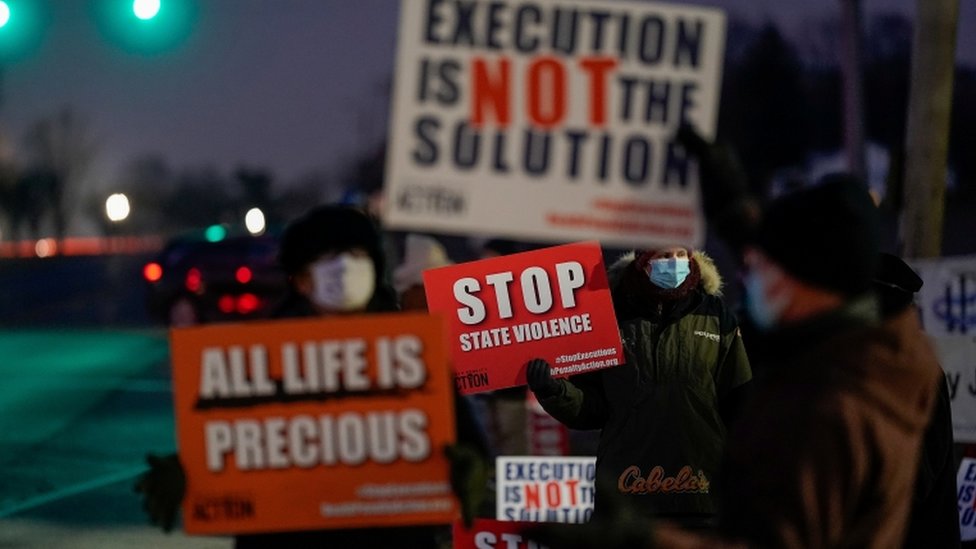 The latest execution was postponed twice – first by Covid-19, then by a judge – until a Supreme Court ruling cleared the way for it to take place in the early hours of Wednesday.

dramatic move late on Monday, a judge in Indiana had halted the scheduled injection until a mental competency hearing could be held.

Her lawyers argued that she had been born brain-damaged and was too mentally ill to be executed.

As a child she was routinely sexually and physically abused by her father and trafficked by her mother, family members said. Her treatment was so violent that it amounted to torture, her lawyers say.

Her defence team believe that at the time of her crime, Montgomery was psychotic and out of touch with reality. That opinion is supported by 41 current and former lawyers as well as human rights groups like the Inter-American Commission on Human Rights.

But her victim’s family and friends say the murder committed by Montgomery was so horrific that she deserved to be put to death regardless of her mental health.

She killed 23-year-old Stinnett in Skidmore, Missouri, after befriending the pregnant woman online over a shared love of dogs. After driving to Stinnett’s house, Montgomery overpowered the pregnant woman, strangled her with a piece of rope, and cut the baby out of her womb.

Police found Montgomery cradling a new-born girl she claimed to have given birth to the day before. After her story fell apart, she confessed to the killing.

She was found guilty of the crime in 2007. The next day, she was sentenced to death.

The fight to save the life of a death row inmate is always dramatic up until the very last moment, and none more so than the fight to save Lisa Montgomery. Although only President Trump had the power to grant her clemency and commute her sentence to life in prison, if her lawyers were able to delay her execution until after President-elect Biden takes office, they would have effectively achieved the same thing. Biden has pledged to end the death penalty on the federal level.

And so it all ended – as many death penalty cases do – in an 11th hour flurry of legal filings that pitted Montgomery’s legal team against lawyers for the Department of Justice, who were urging the execution forward. Ultimately, the US Supreme Court ruled against Montgomery in all three of her final legal challenges, including one that argued that it would be unconstitutional to execute Montgomery because she is not mentally competent.

Since 2008, Montgomery had been held in a federal prison in Texas for female inmates with special needs, where she has been receiving psychiatric care. Since receiving her execution date, she’d been placed on suicide watch in an isolated cell.

Montgomery’s lawyer, Ms Henry, said her original legal defence was woefully inadequate, and presented few of the details about her abuse, trauma and mental illness.

The Supreme Court outlawed the death penalty at state and federal level in 1972 but reversed the decision four years later. Since 1976, 16 women other than Lisa Montgomery have been executed but all by individual states rather than by the government.

Before Montgomery’s execution, the last woman to be executed by the US government was Bonnie Heady, who died in a gas chamber in Missouri in 1953, according to the Death Penalty Information Center.

Federal executions had been on pause for 17 years before President Donald Trump ordered them to resume earlier last year.