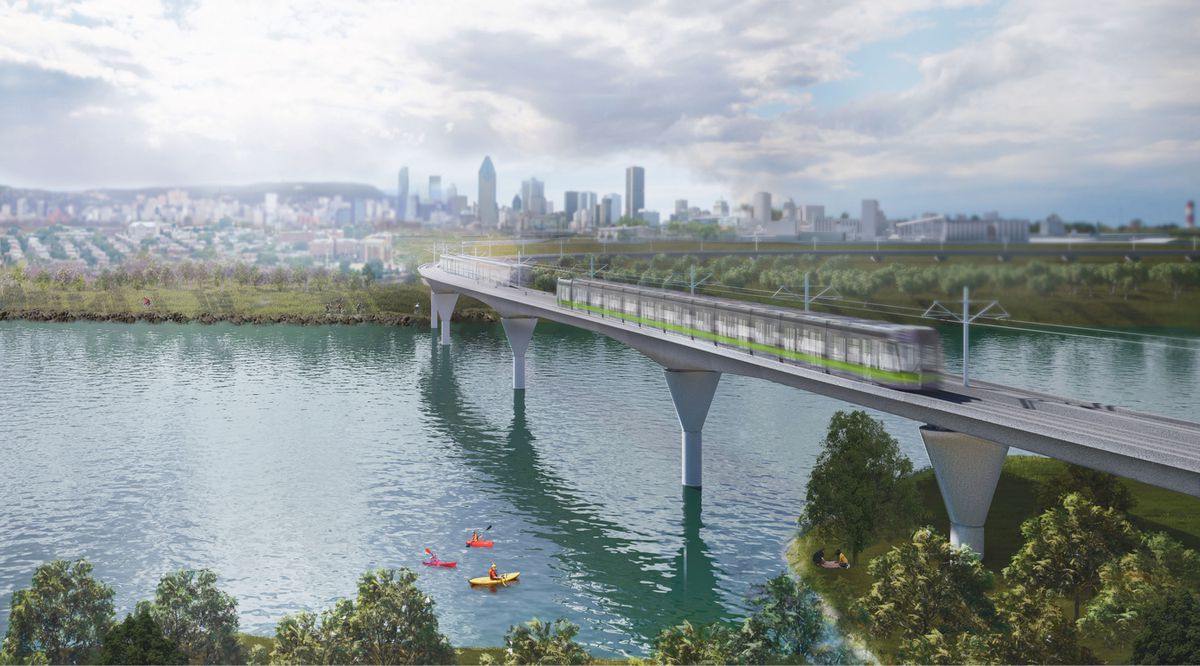 Canadian pension fund giant Caisse de dépôt et placement du Québec is pushing ahead with a new $10-billion light rail transit project in Montreal in another major bet that public transportation infrastructure will deliver returns for its depositors in the years to come.

Executives with the Caisse joined Quebec Premier François Legault and Montreal Mayor Valérie Plante on Tuesday in unveiling plans for a new 32-kilometre automated light rail system linking the eastern and northeastern areas of Montreal Island to the downtown core. Parts of the territory covered by the new network are former industrial lands that have fallen into neglect and the political leaders are hoping a robust transit link will breathe new life and investment into the area.

“All the big cities in the world try to draw inspiration from the Silicon Valley model in California. In our case, what we’ll try to build is a Silicon Valley North with four seasons in Montreal’s east end,” Mr. Legault told reporters, touching on a theme of his 2013 book Cap sur un Québec gagnant. “For that to happen, we need a public-transit project for the 21st century.”

The Caisse will lead the project as financier and manager with significant funding contributions to come from the Quebec and Canadian governments. The exact split has yet to be decided. For the Caisse’s existing Réseau Express Métropolitain (REM) light-rail project, still under construction, the pension fund is shouldering roughly 50 per cent of the projected $6.5-billion cost while Quebec and Ottawa evenly split the rest.

Taking on a second major transit infrastructure project when it is still in the throes of the first will add to the pressure on the Caisse, which has a dual mandate of optimizing returns while contributing to Quebec’s economic development. Executing both projects at once will be a major trial for new Caisse chief executive Charles Emond, who is keen to prove the Quebec Inc. pillar can build new infrastructure instead of just investing in existing assets.

“We have a project today that is technically feasible, that is economically viable and that we want to be profitable,” Mr. Emond said. “This is a sustainable investment that will contribute to Quebeckers’ retirement plans and generate significant benefits for the economy, the environment and communities.”

The new transit link, dubbed the REM de l’Est, will be a raised-track network with 23 new stations that backers say will mark a major improvement in public transit options and trip speeds for area residents. The system will link to existing transit networks and carry a projected 133,000 riders a day by 2044. It will connect to several industrial parks such as the Port of Montreal and touch 27 million square feet of vacant land conducive to redevelopment, according to a Caisse project presentation.

Montreal is trying to decontaminate industrial lands in the eastern section of the island, which were once heavily used by the petrochemical industry, in a bid to attract new investment. Adding a defining transit link “will be very helpful for workers, for families and for companies,” because it can be difficult to get around the area now, Ms. Plante said.

REM de l’Est is the most significant development for the eastern part of Montreal Island since the late 1970s, said Michel Leblanc, president of the Chamber of Commerce of Metropolitan Montreal. Almost all major petroleum refining installations there have closed and for 40 years, Quebec’s political and business leaders have been grappling with what comes next for the area to supplement warehousing, he said.

“There’s a big plan to try to [woo] green tech companies that would manufacture products here,” like batteries or parts for electric vehicles, Mr. Leblanc said. “The difficulty was how do you attract those investors in an area that’s almost completely vacant at the moment with no real public-transit structure nearby?… This is a game-changer.”

Consultations on the project are expected to take place over the next two years with the first shovels in the ground in mid-2023. If all goes to plan, the system would welcome its first users in 2029.