The mass Covid testing of students before Christmas has so far found 0.2% testing positive at one of the universities taking part.

The University of Portsmouth is reporting “very low numbers” of positive cases from its Covid testing.

“We are seeing fewer than two per day on average at present,” said vice-chancellor Graham Galbraith.

He criticised a “blame culture” in which students had been accused of spreading infections.

The mass testing of students, launched on campuses last week, has been screening hundreds of thousands of students preparing to leave for the Christmas holidays.

There are no national figures so far on results from university testing, but some early findings are being published.

These include three universities in Tier 2 for infection rates – and not the highest Tier 3 areas – and it is not known whether these are representative.

The most recent figures for the general population show wide regional differences in rates of testing positive, including those without symptoms – from 1.7% in Yorkshire and the Humber to 0.4% in the east of England. 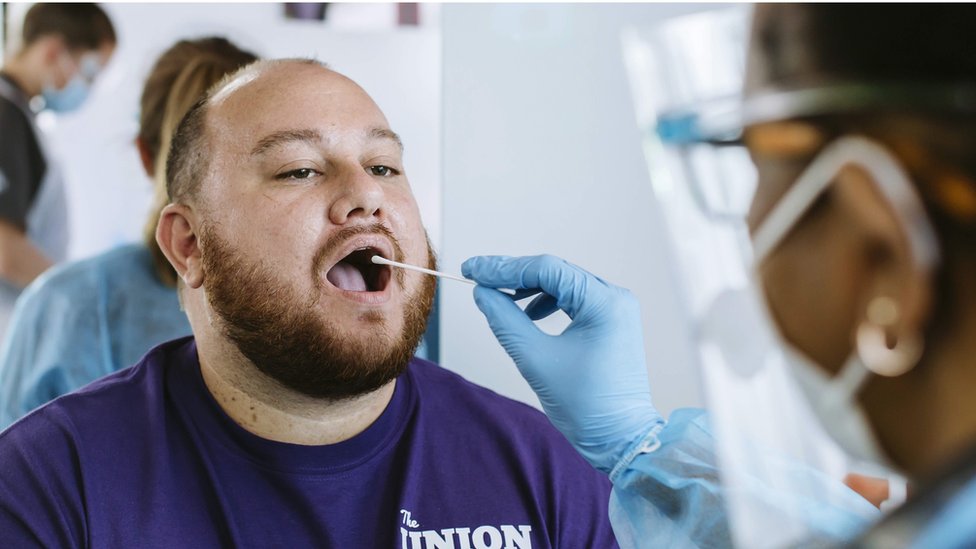 At the University of Portsmouth, an initial sample of about 4,500 students, showed a rate of 0.2% positive results, or about nine students.

The University of Cambridge had even lower positive results last week from tests for those who did not have any Covid symptoms – with zero positive cases from more than 10,000 students being screened.

There were separate figures from Cambridge for those who thought they had Covid symptoms – with nine cases being confirmed out of 71 tested.

Cambridge has run its own test and tracking system throughout the term.

“Where outbreaks did occur, the testing programme helped us identify these quickly and put measures in place to prevent them spreading further,” said Patrick Maxwell, regius professor and head of Cambridge’s school of clinical medicine.

“Once the second lockdown was put in place, we saw the number of infected students fall away to single figures,” said Prof Maxwell.

At the University of Reading, more than 3,500 tests have been carried out for students without symptoms – finding 15 positive results, about 0.4% of tests.

Portsmouth’s vice chancellor said he wanted to publish the evidence to show how much infection rates had fallen among his university’s students.

Prof Galbraith said students should not “bear the brunt of blame and criticism when in reality their overall behaviour has been exceptionally positive in conforming with the rules”.

The university, which carried out its own Covid testing through the autumn, says that its data shows there was no link between the pattern of student infections and cases in the wider local population.

There was a surge in early October in cases among students and the local Portsmouth population.

But from mid-October cases among students began to fall – while cases in the local population continued to climb, with these divergent trends continuing through to mid-November, when local cases also began to reduce.

The university says its own testing and tracing system had sharply reduced cases among students – and that students were unlikely to have been driving local outbreaks.

Nick Hillman, director of the Higher Education Policy Institute, said the “hard evidence” now emerging from testing could prove that expectations about infection rates among students had been wrong.

“Like everyone else, the higher education sector has been learning about Covid as it has gone along,” he said.