A UK grandmother has become the first person in the world to be given the Pfizer Covid-19 jab as part of a mass vaccination programme.

Margaret Keenan, who turns 91 next week, said it was the “best early birthday present”.

She was given the injection at 06:31 GMT – the first of 800,000 doses of the Pfizer/BioNTech vaccine that will be dispensed in the coming weeks.

Up to four million more are expected by the end of the month.

Hubs in the UK will vaccinate over-80s and some health and care staff – the programme aims to protect the most vulnerable and return life to normal.

Health Secretary Matt Hancock, who has dubbed Tuesday V-day, said this simple act of vaccination was “a tribute to scientific endeavour and human ingenuity and to the hard work of so many people.

“Today marks the start of the fightback against our common enemy, the coronavirus,” he said.

Scotland’s First Minister Nicola Sturgeon said viewing footage of the moment gave her “a lump in the throat”.

Prime Minister Boris Johnson, on a visit to a London hospital to see some of the first people getting the jab, said getting vaccinated was “good for you and good for the whole country”.

“I feel so privileged to be the first person vaccinated against Covid-19,” Ms Keenan, who is originally from Enniskillen, Co Fermanagh, said.

“It’s the best early birthday present I could wish for because it means I can finally look forward to spending time with my family and friends in the new year after being on my own for most of the year.

“My advice to anyone offered the vaccine is to take it. If I can have it at 90, then you can have it too,” she added.

The second person vaccinated in Coventry was William Shakespeare, 81, from Warwickshire, who said he was “pleased” to be given the jab and hospital staff had been “wonderful”. 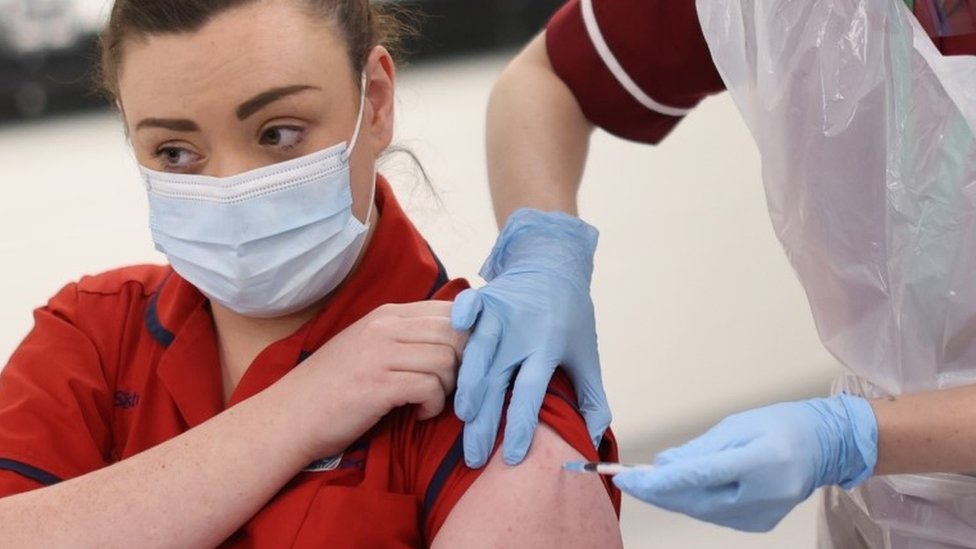 Throughout the morning, patients and health workers at some 50 hospitals around the UK have been getting the jab:

The UK is the first country in the world to start using the Pfizer vaccine after regulators approved its use last week.

Speaking in the Commons, Health Secretary Matt Hancock stressed people did not need to apply for the vaccine – the NHS would be in touch with those eligible and he urged them to “please step forward for your country”.

Mr Hancock went on to warn that even while we can see the route out, there was “still a long march ahead”, saying there were “worrying signs” of the virus growing in Essex, London and Kent.

More than 60,000 people in the UK have died within 28 days of a Covid-19 test, but there are signs the UK could be at the peak of the pandemic’s second wave.

New data released by national statisticians for the week ending 27 November showed that of the 14,106 deaths registered, nearly 3,400 involved Covid.

This is 20% higher than the five-year average but is similar to the percentages seen in the past two weeks.

On a visit to London’s Guy’s Hospital, Prime Minister Boris Johnson spoke to 81-year-old Lyn Wheeler, who was the first to receive the vaccine there.

“It is really very moving to hear her say she is doing it for Britain, which is exactly right – she is protecting herself but also helping to protect the entire country,” Mr Johnson said.

Earlier, the prime minister thanked the NHS and “all of the scientists who worked so hard to develop this vaccine”, the volunteers and “everyone who has been following the rules to protect others”.

Labour’s shadow health secretary Jon Ashworth said it was “absolutely fabulous” to see people getting the vaccine and thanked everyone involved in making it happen.

Some 800,000 doses of the Pfizer/BioNTech vaccine have been secured by the government to be administered in the coming weeks – although vaccination is not compulsory.

Orders have been placed for 40 million in total – enough for 20 million people, as two courses are needed.

However, most of that is not expected to become available until next year, although government sources said another four million doses should arrive in the country by the end of this month.

Mr Hancock said he expected it to take “several weeks” to get the first group of health workers, care staff and over-80s vaccinated.

Vaccine taskforce chairwoman Kate Bingham struck a positive note, telling the BBC her “gut feeling” was that “we will all be going on summer holidays”.

Mr Hancock later said he was confident the summer of 2021 would be a bright one and said he has already booked a holiday in Cornwall.

‘A momentous day but huge task ahead’

This is a momentous day, but make no mistake the NHS faces a huge task in rolling out this vaccine.

First there needs to be a smooth supply – and already there are reports of manufacturing problems which means the UK is expecting less than half of the 10 million doses of the Pfizer jab it was planning for by the end of the year.

The fact it needs to be kept in ultra-cold storage and in batches of 975 units is an added complication that has meant it cannot yet be taken into care homes to vaccinate residents, who are the very highest priority group, or sent out to GPs to run vaccination clinics in the community.

NHS bosses hope to receive guidance from the regulator next week on how to get around this.

But these factors illustrate why the UK is still pinning its hopes on a second vaccine developed by Oxford University.

That one can be kept in fridges and so is easier to distribute, is British made and – what is more – there is an ever-growing stockpile ready to use.

If that vaccine gets the green light from regulators, there will be a genuine hope the first few months of 2021 will see rapid progress in offering the most vulnerable jabs so the UK can return to something closer to normality.

“This one has been tested in many thousands of people in clinical trials and, of course the independent regulator the MHRA, has looked at it carefully – as it always does – and has given it the green light.

Are you receiving the Covid-19 vaccine today? Or do you have any questions? Get in touch by emailing haveyoursay@bbc.co.uk.