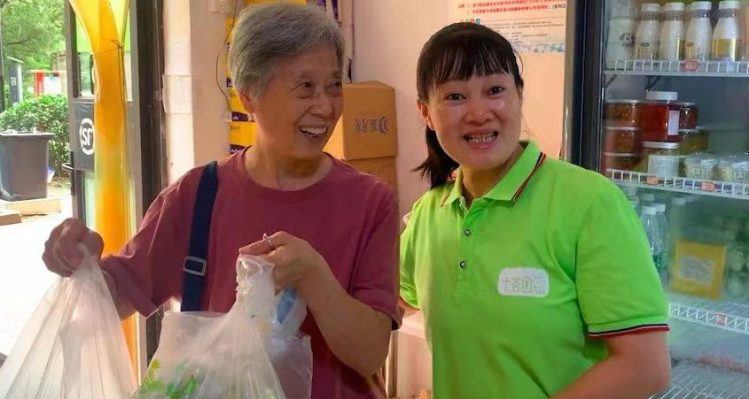 Nearly all of China’s largest internet firms have established a presence in online grocery. Just this week, news arrived that Alibaba co-led the $196 million C3 funding round of Nice Tuan, the two-year-old grocery group-buying firm’s fourth round year to date.

People in China shop online for almost everything, including groceries. At first, grocery e-commerce appears to have caught on mainly among the digitally-savvy who have grown reliant on the convenience of e-commerce and don’t mind paying a bit more for delivery. Many elderly shoppers, on the other hand, still prefer visiting traditional wet markets where ingredients are generally cheaper.

Now tech companies in China are scrambling to capture grocery shoppers of all ages. A new business model that’s getting a lot of funding is that of Nice Tuan, the so-called community group buying.

In conventional grocery e-commerce, an intermediary platform like Alibaba normally connects individual shoppers to an array of merchants and offers doorstep delivery, which arrives normally within an hour in China.

A community group-buying, in comparison, relies on an army of neighborhood-based managers — often housewives looking for part-time work — to promote products amongst neighbors and tally their orders in group chats, normally through the popular WeChat messenger. The managers then place the group orders with suppliers and have the items delivered to pick-up spots in the community, such as a local convenience store.

It’s not uncommon to see piles of grocery bags at corner stores wating to be fetched these days, and the model has inspired overseas Chinese entrepreneurs to follow suit in America.

Even in China where e-commerce is ubiquitous, the majority of grocery shopping still happens offline. That’s changing quickly. The fledgling area of grocery group-buying is growing at over 100% year-over-year in 2020 and expected to reach 72 billion yuan ($11 billion) in market size, according to research firm iiMedia.

It sounds as if grocery group-buying and self-pickup is a step back in a world where doorstep convenience is the norm. But the model has its appeal. Texting orders in a group chat is in a way more accessible for the elderly, who may find Chinese e-commerce apps, often overlaid with busy buttons and tricky sales rules, unfriendly. With bulk orders, sales managers might get better bargains from suppliers. If a group-buying company is ambitious, it can always add last-mile delivery to its offering.

Chinese tech giants are clearly bullish about online grocery and diversifying their portfolios to make sure they have a skin in the game. Tencent is an investor in Xingsheng Youxuan, Nice Tuan’s major competitor. Food delivery service Meituan has its own grocery arm, offering both the traditional digital grocer as well as the WeChat-based group-buy model. E-commerce upstart Pinduoduo similarly supports grocery group purchases. Alibaba itself already operates the Hema supermarket, which operates both online and offline markets.