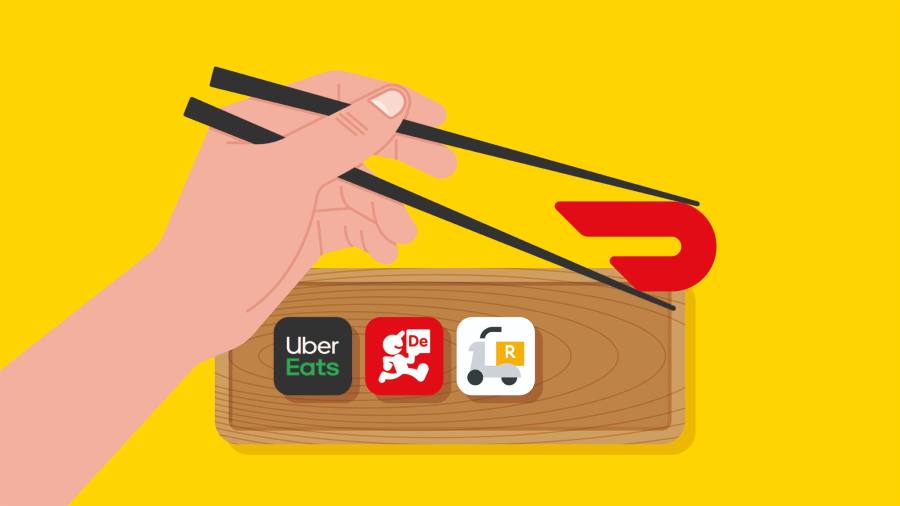 This time last year, I had a revealing chat with Ryo Miyake, the Japanese fencer who won a medal at the 2012 London Olympics and was now pedalling an Uber Eats beat in Tokyo.

Mostly, we discussed the zeitgeisty weirdness of his new job: if it had not been for the pandemic, Miyake would have been busy preparing to carry a nation’s sporting hopes before a home crowd. Instead, with no training camp to live in, he suddenly needed cash for rent and figured the cycling and food-haulage would keep him in shape until the Games were back on.

The solution, he said, felt natural. Times had been changed both by plague and by tech. The booming business of Uber Eats — and food delivery in general — was being propelled by Covid-19 and the closure of offices and restaurants, its ascendancy accelerating the rise of a tech-enabled gig economy it might otherwise have taken Japan much longer to embrace.

Miyake revealed that his Ubering had upturned his assumptions about how Japanese people eat. The nicest houses in the poshest areas, he noted, always seemed to place the minimum orders for the cheapest grub. The bountiful trays of high-end sushi and tempura went to the shabbier apartment blocks.

Miyake’s observations seemed all the more relevant last week when DoorDash, the US leader in home food delivery, announced that it was launching in Japan and targeting a market where this business is still in its infancy.

As DoorDash acknowledges, the food fight will only intensify

DoorDash has chosen to compete not only with the relatively established likes of Uber Eats and domestic specialists such as Demae-can and Rakuten, but also with others that have turned up recently with plans to conquer the world’s third-biggest economy. (In September, Germany’s Delivery Hero began operations in six Japanese cities under its Asian brand Foodpanda.)

As DoorDash acknowledges, the food fight will only intensify as it is joined by Japanese logistics heavyweights such as the convenience stores and parcel delivery operators.

When the FT spoke to DoorDash’s chief executive, Tony Xu, about the venture, he used the now familiar phrases of foreign companies that enter the Japanese stage: accentuation of the country’s large economy, the delicate dance around why this gold mine is still untapped, the humble refusal to dictate, at this respectful learning point, what might be the “right” answer for this market.

Indeed, many others, in different industries, have used versions of this on their way into Japan, from retailers such as Walmart and Tesco to banks and telcos that have ultimately retreated.

There have, of course, been success stories of foreign companies here — Apple and McDonald’s stand out — but recent years have posed a broad question of whether foreign tech companies can achieve regular success in Japan where their bricks and mortar counterparts have struggled.

In DoorDash’s case, much will hinge on whether it has entered Japan at a time of anomaly, or of an incipient shift in behaviour — will food delivery, for example, emerge from the pandemic as a long-term preference of the elderly, or the offspring of the elderly ensuring their parents eat well?

For now, the situation does seem enticing: after more than a year of drastically diminished sales, an increasing number of food vendors are looking to delivery apps to revive their dangerously diminished fortunes.

Working-age customers, meanwhile, are using this tech to overcome disruptions to a fragmented dining ecosystem that offered massive choice and centred on the provision of food (eat-in restaurants, supermarkets and convenience stores geared to ready-meals) either near their place of work or near the other end of a commute. The resumption of office work may not break the general appeal of food delivery, but it may herald a practical cliff edge.

The biggest issue that tech, in Japan’s case, has not yet proven it can overcome is one of capacity. Restaurants supplying Uber, DoorDash and others with the food are doing so because the professional kitchens of Japan, which are generally small, have been forced by Covid-19 into an unprecedented phase of excess capacity.

The moment those restaurants start filling again — no matter how significant the demand from apps — many kitchens could find themselves quickly unable to meet orders.

As for Miyake, he wondered whether the relief of a return to normal commuting life would eventually highlight the oddity of the role he had found himself doing. “I’m sure that a lot of the things I deliver, it would be quicker for people to get it themselves.”