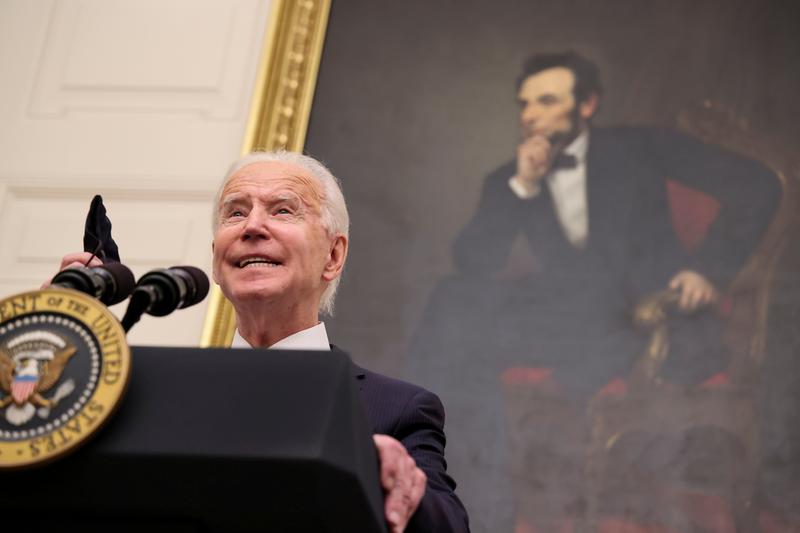 WASHINGTON (Reuters) – U.S. President Joe Biden on Friday will sign two executive orders aimed at speeding pandemic stimulus checks to families who need it most and increasing food aid for children who normally rely on school meals as a main source for nutrition.

Biden, who has proposed a $1.9 trillion stimulus package, is using the two orders to try to ease the burden on people while the legislation is negotiated in Congress. He has made fighting the pandemic an early focus of his new administration.

The pandemic recession has hit Americans hard. Some 16 million are now receiving some type of unemployment benefit, and an estimated 29 million don’t have enough to eat. Women, minorities and low-income service workers have been disproportionately impacted, with Black and Hispanic workers facing higher jobless rates than white workers.

“We’re at a precarious moment in our economy,” Brian Deese, director of the White House National Economic Council, told reporters in a preview of the orders.

He said the actions are not a substitute for comprehensive legislative relief, “but they will provide a critical lifeline to millions of American families.”

In the first order, Biden will ask the Treasury Department to consider taking steps to expand and improve delivery of stimulus checks, such as establishing online tools for claiming payments.

“Many Americans faced challenges receiving the first round of direct payments and as many as 8 million eligible households did not receive the payments issued in March,” a White House fact sheet said.

Biden will also seek to increase access to food for millions of children who are missing meals because schools are closed due to the pandemic.

He will ask the Agriculture Department (USDA) to consider issuing new guidance that would increase the aid given to families who normally rely on schools to provide a main meal of the day for their children.

It could provide a family with three children more than $100 of additional support every two months.

“USDA will consider issuing new guidance that would allow states to increase SNAP emergency allotments for those who need it most. This would be the first step to ensuring that an additional 12 million people get enhanced SNAP benefits to keep nutritious food on the table,” the fact sheet said.

Biden’s directive also eliminates a Trump order that allowed federal agencies to move many career federal employees into a category without job protections and putting them at risk of being fired.

“Its existence threatens the critical protections of career employees and provides a pathway to burrow political appointees into the civil service,” it said.