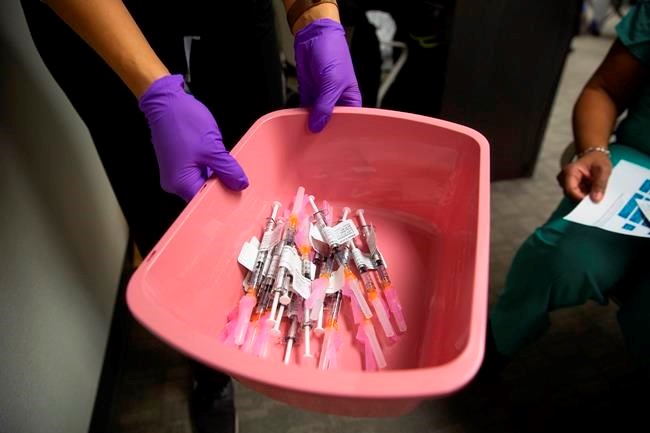 Advocates say inmates should have speedy access to the COVID-19 vaccine, given how susceptible prisons and jails have been to outbreaks and how prevalent chronic disease is in that population.

The Correctional Service of Canada said that, as of Monday, there were a total of 201 active COVID-19 cases in federal prisons. The bulk were at Joyceville Institution near Kingston, Ont., Stony Mountain Institution near Winnipeg and the Saskatchewan Penitentiary near Prince Albert.

There have also been several outbreaks in provincially run jails.

Martha Paynter, a registered nurse in Halifax who provides reproductive care to inmates, said hygiene and ventilation in correctional institutions are issues at the best of times.

There is also high turnover in remand centres and staff are constantly coming and going, she added.

Inmates 50 and older account for one-quarter of the federal prison population. Advocates note people age faster behind bars and are in poorer health than the general public.

“Of course this population should have very quick access to the vaccines,” said Paynter, who added that some might not trust the shots due to bad experiences with health care behind bars.

She said the bigger issue is why there are so many people incarcerated in the first place.

Anita Ho, associate professor in bioethics and health services research at the University of British Columbia, noted Indigenous people are disproportionately represented in the corrections system.

“In general, health among Indigenous peoples in Canada, because of various social determinants of health, are poorer to start with,” she said.

Dr. Joss Reimer, medical health officer for the Winnipeg Regional Health Authority, said criteria for who gets the vaccine in Manitoba in the new year will be expanded to include “correctional facilities,” but did not specify whether that would be inmates, staff or both.

Other provinces have not detailed their plans.

Ontario’s Ministry of the Solicitor General said it will be looking at the availability of doses and would carry out immunizations “based on the latest medical advice and scientific evidence.”

Saskatchewan Health Minister Paul Merriman said: “We will consider based on what the needs are at that specific time and … the amount of vaccines that we have flowing into the province.”

The Correctional Service of Canada was to provide comment later Thursday.

University of Toronto bioethicist Kerry Bowman said there was a consensus about who would receive the first batch of vaccines, but determining who should be next is trickier.

He said it’s not clear whether the goal of the second phase will be to boost the economy or to reach more vulnerable people.

In the United States, there has been some pushback against inmates getting dibs earlier.

“There’s no way it’s going to go to prisoners before it goes to the people who haven’t committed any crime,” Colorado Gov. Jared Polis said after the state’s vaccination rollout plan was criticized.

Bowman said that kind of argument is neither scientifically nor ethically sound.

“It’s a very dangerous precedent in any society when you start saying these lives are more valuable than those lives.”

This report by The Canadian Press was first published Dec. 24, 2020.