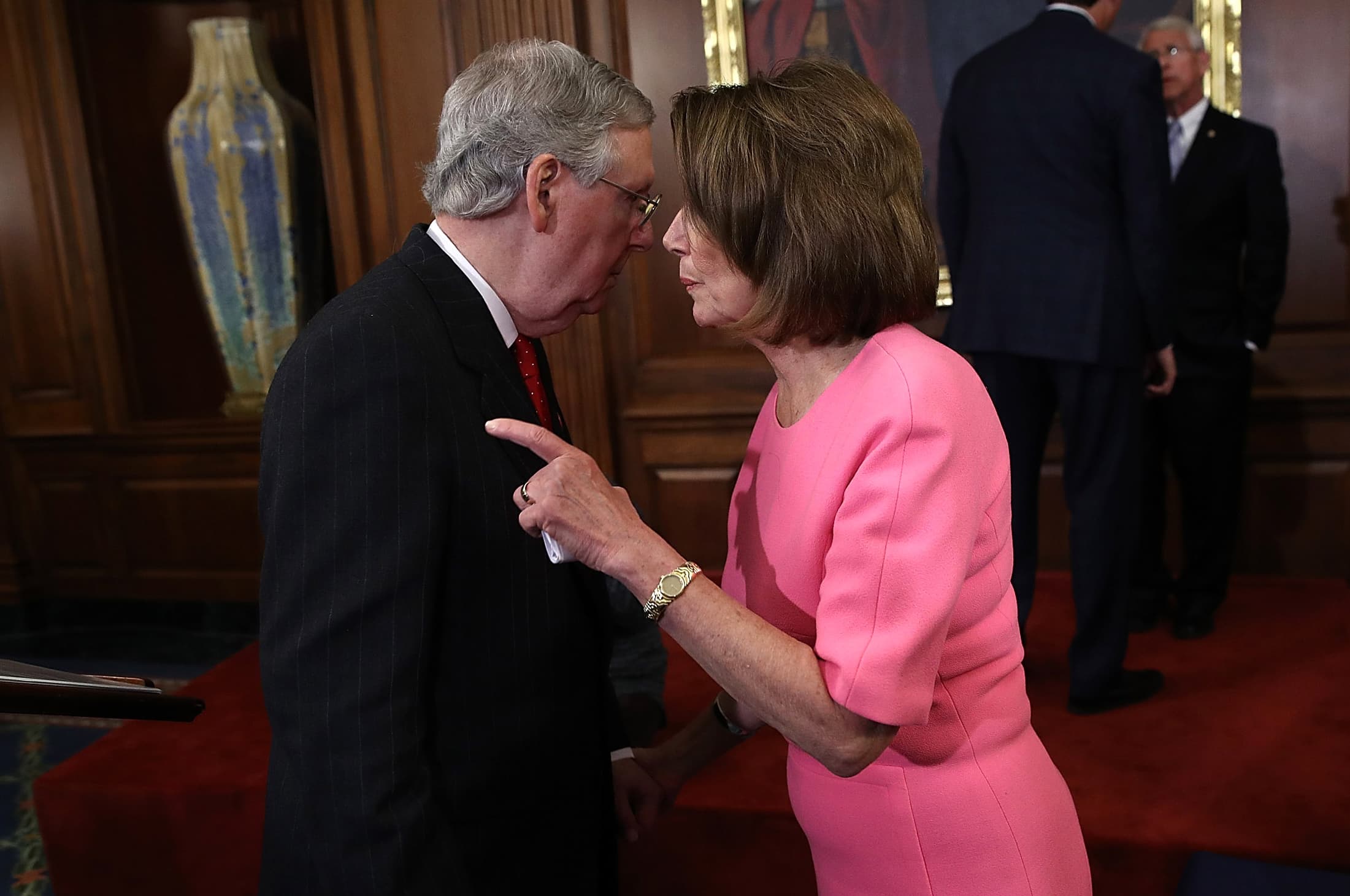 The top four congressional leaders met Tuesday to try to strike deals to fund the government and send another round of coronavirus relief as millions of Americans await help.

House Speaker Nancy Pelosi, D-Calif., set up the talks with Senate Majority Leader Mitch McConnell, R-Ky., Senate Minority Leader Chuck Schumer, D-N.Y., and House Minority Leader Kevin McCarthy, R-Calif., as Congress runs out of time to address both issues. Treasury Secretary Steven Mnuchin, who spoke to Pelosi on the phone for more than an hour Tuesday, called into the huddle among the congressional leaders.

The group broke up around 5 p.m. ET and is set to convene again at about 7:30 p.m. ET, according to a source familiar with the plans. Leaving Pelosi’s office, McCarthy told reporters, “I think there’s progress.”

The discussions mark the most significant effort yet for the four leaders to come to a bipartisan agreement on a package that could get through a divided Congress. Absent congressional action, government funding will lapse Saturday and 12 million people will lose unemployment benefits the day after Christmas.

Congress has failed for months to send new assistance as the pandemic stretches the health-care system’s capacity and leaves millions of Americans scrambling to find a meal and pay their rent. The imminent expiration of financial lifelines, a weakening economy and the need for money to ensure Covid-19 vaccines get to health-care workers and elderly Americans have forced lawmakers to once and for all seek a compromise.

A rank-and-file bipartisan group of senators and representatives has played a role in pushing congressional leaders closer to crafting a relief package. The lawmakers released a plan Monday that would put more than $700 billion into small business loans, unemployment insurance, vaccine distribution, education and rental assistance.

Negotiators in the group urged their party leaders to pass the bill outright or at least use it as a template for a final agreement.

It would extend the pandemic-era jobless benefits programs buoying 12 million people and add a $300 per week federal unemployment supplement for 16 weeks. It would also keep a federal eviction moratorium in place for another month, through Jan. 31, and extend federal student loan forbearance through April 1.

It would not include direct payments, which many lawmakers have called crucial to providing enough help to struggling families. Sens. Bernie Sanders, I-Vt., and Josh Hawley, R-Mo., have insisted on Congress putting a second $1,200 stimulus check in an aid bill.

The full bipartisan group did not sign off on a separate piece of the proposal that addresses liability protections for businesses and state and local government relief — two issues that have repeatedly blocked progress toward a deal. McConnell has urged Congress to put both provisions aside for now.

Still, Pelosi and Schumer have called money for state and local governments essential to preserving public sector jobs. Asked Tuesday afternoon if he would still push for the aid during the meeting among congressional leaders, Schumer told reporters, “I’m not going to get into negotiations in any way that will occur.”

Despite the disagreements, congressional leaders have insisted they will not leave for the holidays without approving an emergency aid package. They hope to tie relief provisions to a government spending bill, which appropriators could release as soon as Tuesday.

McConnell said “it is still my hope” that Congress will reach an omnibus funding agreement to keep the government running through Sept. 30, 2021.

Democrats have cast any coronavirus assistance bill they would pass this week as a down payment until President-elect Joe Biden takes office on Jan. 20.

The U.S. is now routinely recording more than 200,000 coronavirus cases on a daily basis. Covid-19 is killing thousands of Americans every week, and has now taken more than 300,000 lives nationwide.

The country got a glimmer of hope on Monday when vaccinations against the coronavirus started. But as the virus spreads nationwide, Americans will continue to die and the economy will struggle to recover on its own during the months until most people can get a shot.