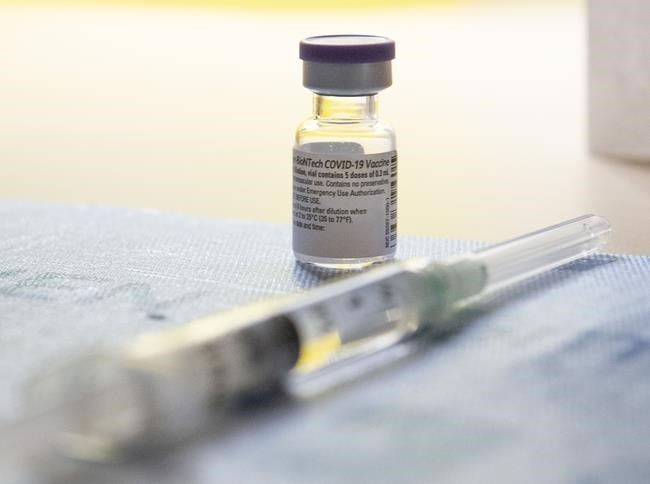 Kenney made the announcement in a video released late Monday, which showed him standing next to a cargo jet at Calgary International Airport just after sunset and wearing a UPS reflective vest.

“We hope to have our first Albertan to get the first dose of the vaccine within the next 24 hours,” he added, saying that intensive care nurses are queued up to be the first to receive the vaccine.

“This is a happy day after these nine tough months, to show that there really is a light here.”

Earlier in the day Alberta’s health minister said another 25,000 are coming doses are coming next week.

“These next few weeks are going to be the toughest yet, but relief is on the way, and it’s starting this week,” Tyler Shandro said during a virtual news conference earlier Monday.

“We’re going to give the first dose of the vaccine to 29,000 health-care professionals by the end of December.”

Shandro noted the first shipments need to be distributed at their point of arrival, so they cannot be transported to treat long-term care home residents, who have been especially vulnerable to the novel coronavirus.

“With this strategy, we’ll directly protect those providing care and also start to protect patients indirectly by reducing the risk of transmission from staff,” he said.

Unspecified amounts of the Moderna vaccine, which still needs approval from Health Canada, are expected by the end of December, Shandro said.

“We’re getting these vaccines out as fast as humanly possible,” he said.

“But I have to emphasize this is a process that will take months.”

The rest of the population is to be vaccinated in two phases throughout the spring and summer as more doses become available.

The Pfizer and Moderna vaccines each require two shots weeks apart to be effective.

Last week, Kenney announced tighter public-health restrictions to choke off many community contact points. Museums, gyms, hair salons, spas and casinos had to close as of Sunday. Retail businesses are limited to 15 per cent capacity, and restaurants and bars to takeout and delivery.

No indoor or outdoor gatherings are allowed, although people can ski, walk or do other fitness pursuits as long as they maintain physical distancing.

Alberta has been leading the country in infection rates of late. Daily case counts have been well over 1,000 for almost a month. On Monday, Dr. Deena Hinshaw, chief medical officer of health, reported a new daily high of 1,887 cases.

There were 716 people in hospital, 136 of whom were in intensive care. There were 15 more deaths, bringing that total in the province to 734.

“Malls do need to comply with the 15 per cent capacity cap,” Hinshaw said. “That would include all those who were inside the mall, in both common areas and stores.”

She said officials will be following up with store and mall owners and noted that the province has increased the number of peace officers able to hand out health-violation tickets.

The Opposition NDP said more bridging help is needed for workers who find themselves laid off due to the recent changes. NDP labour critic Christina Gray urged the province to give workers suddenly facing unemployment $1,000 each to tide them over until employment insurance or other federal COVID-19 aid kicks in.

“Instead of being able to spend some money on gifts this holiday season, many Albertans will just be trying to keep a roof over their head and food on their table,” said Gray. “Right now people don’t have weeks (to wait).

This report by The Canadian Press was first published Dec. 14, 2020.