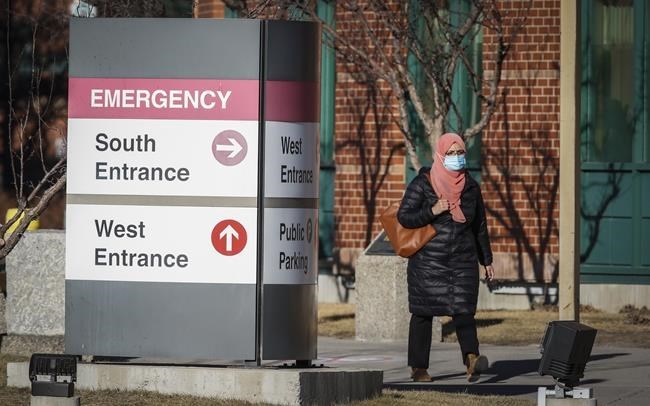 EDMONTON — As Alberta recorded another daily record of COVID-19 cases Thursday, its chief medical officer of health warned that rural areas are feeling the effects.

“While infection rates in Edmonton and Calgary make up the majority of cases in the province, we’re seeing increased spread in many rural communities,” Dr. Deena Hinshaw Hinshaw said.

“COVID-19 is not a Calgary problem or Edmonton problem. This is a provincial problem within the context of a global problem.

“Our overall active case rates prove that COVID-19 doesn’t care where you live or what your postal code is.

“It only takes one case entering a community to cause significant spread.”

Alberta has been straining under soaring numbers of COVID-19 and currently leads the country in per-capita case rates.

It set a single-day record Thursday with 1,854 new cases, even more than in Ontario.

There were 511 Albertans in hospital, 97 of them in intensive care. A total of 575 Albertans have died.

The case surge has overwhelmed the contact tracing system and strained the health system. The province is now reassigning staff, space and patients to cope and has begun making contingency plans to bring in field hospitals if necessary.

However, some of the key restrictions on businesses and attendance at worship services don’t apply to some rural and remote areas with low infection rates.

Also, while Calgary, Edmonton and other municipalities have mandated masks in indoor public spaces, Kenney has refused to follow the lead of all other Canadian provinces to make it provincewide.

About 16 per cent of the 17,743 active cases are outside the Calgary and Edmonton health zones.

Opposition NDP health critic David Shepherd said if COVID does not respect postal codes, why has the United Conservative government issued half-hearted and varying levels of health restrictions based on geography while refusing to impose a provincewide mask mandate?

Shepherd said Kenney is playing politics with the health rules and Albertans are suffering as a result.

“He is more concerned about satisfying them and losing political capital than he is about showing leadership to protect Albertans.”

Kenney has said a provincewide mask bylaw is unnecessary and the health rules are a measured and targeted way to keep Albertans safe while keeping jobs and the economy going.

He has also said 90 per cent of Albertans are already under some kind of municipal mask bylaw. During a Nov. 26 Facebook town hall discussion he questioned whether rural residents working and living remotely would even follow it.

“Imagine you got a couple of guys working in a big barn way up in the M.D. of Opportunity, hundreds of kilometres away from the closest COVID hot zone,” said Kenney. “Do you really think those guys are going to put on a mask because I ask them to or tell them to?”

Kenney said one of his rural caucus members told him some of his constituents would be reflexively rebellious if told to mask up: “He said, ‘You know a lot of these folks who are (masking up) now, they would take it off the moment the government tells them to wear it.’”

Provincewide there is a ban on gatherings in homes beyond those who live under the same roof. Outdoor gatherings are capped at 10 people. And students in grades 7 through 12 are learning virtually at home through the Christmas holidays.

In areas with high caseloads, there are new restrictions on retailers, businesses, restaurants and entertainment options like casinos.

Those restrictions don’t apply to low-case areas, which include some rural regions in north and central Alberta.

This report by The Canadian Press was first published Dec. 3, 2020.